Updated 26-Nov-2010 The Web Daypass now works on all phones including Android devices.

T-Mobile introduced a new Web Day Pass option for its prepaid users this week.  It provides 24 hours of unlimited data access for $1.49.  While its a little pricey for everyday use, it should come in handy for travelers or anyone else needing to use data occasionally.  To activate the day pass you just open the browser and try to load a page and you will be asked if you want to buy a DayPass. 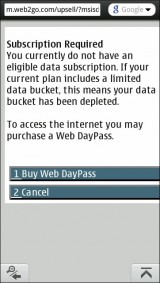 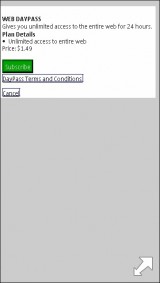 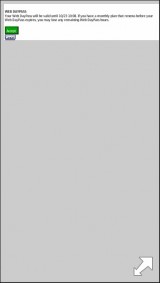 I tested it on an Nokia N8 Symbian smartphone. As soon as I opened my browser the  prompt (first image, above) appeared and a few clicks latter (images, above – click the thumbnails to vew full size) the Web DayPass was active (image, below) and my prepaid Balance was $1.49 lighter.  With  the DayPass active all the data aware apps on the N8 including Mail, Social, Ovi and Google Maps and Opera Mini and Mobile worked normally. The Broadband Reports mobile speed test reported a very decent download speed of 1859 kbit/s on T-Mobile’s HSPA+ network. The DayPass doen’t auto-renew, you have to reactivate after 24 hours to keep using it 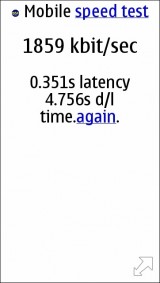 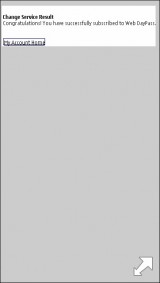 While T-mobile’s site appears to indicate that the DayPass is available for any device on any prepaid plan, the operator doesn’t seem to want you to use Android handsets with it. At least when I tried with a Google Ion, which is a Google developer phone version of T-Mobile’s MyTouch 3G, I got the “Subscription Upgrade Required” message shown at right.  Clicking the “Please click here…” link just reloaded the page as did  the other four links on the page.

I tried without success to get around the message by trying every possible combination of 3G on, 3G off, switching between T-Mobile’s T-Mobile’s two prepaid APNs; epc.tmobile.com and wap.voicestream.com and trying to go through the T-Mobile prepaid account page at wap.t-zones.com/myaccount or wap.myvoicestream.com.  No matter what I tried I couldn’t get past that unhelpful message. 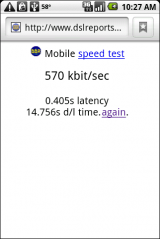 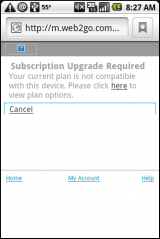 I called T-Mobile support and after being transfered several times by T-Mobile prepaid reps who couldn’t figure out why I couldn’t activate a Web DayPass on the Ion, a  customer support supervisor stated that the Web DayPass is not available on Android phones.

Blocking Android  seems like a strange restriction. Sure, Android phones can use a lot of data, but so can Symbian, Windows Mobile, Maemo and iOS phones.  I don’t know about other smartphones but based on my experience the DayPass works on at least one Symbian phone, the Nokia N8.

When I swapped the DayPass enabled SIM into the Ion data worked on it too so at least there is a workaround if you have an extra phone and don’t mind swapping SIMs. It’s certainly possible for T-Mobile to close that loophole if they really don’t want Android devices using the DayPass so enjoy it while you can. The year and a half old Ion doesn’t support HSPA+ so I only got 570 kbit/s with it but that’s still a respectable 3G speed.

Update: 26-Nov-2010: After hearing reports of other users being able to purchase a Day Pass using T-Mobile Android phones,  I tried to enable on my Google Ion Android phone again today. When I first tried to go to the T-Mobile My Account page I got:

After retrying several times I was finally able to get to the homepage and purchase a Daypass and data worked fine except that I still got “Error Unknown” most of the time when I tried to access My Account.

On their postpaid monthly data plans, there’s a 5GB “soft”cap.  Once you exceed 5 GB in a month your speed is throttled to about 64 kbit/s.  I’m suspect there is a similar soft cap on the Web DayPass although I don’t know what it is.  There have been reports on various user forums from users claiming that they have been throttled after they have used anywhere  from 30 MB to 150 MB in a day.  150 MB is pretty reasonable (the 5GB monthly cap divided by 30 is 170 MB) but 30 MB is pretty low considering that many desktop web pages are over one MB. I haven’t been throttled yet and I neglected to check my data counter before activating the DayPass, but I’ll try testing the limits tomorrow and update this post when I hit the soft cap.

Update 24-Oct-2010: T-Mobile mentions a 30 MB daily soft cap on the Terms and Conditions page that you click though when activating a DayPass.  After 30 MB, download speed is supposed to be slowed.  I tested that by downloading over 200 MB and I don’t seem to have encountered the cap.  Even after 200 MB I was getting speeds in the 300-500 kbit/s range.  While that’s slower than the best speed (1859 kbit/s) I saw, it’s still 3G performance. The slowdown could as easily be due to network load or atmospheric conditions (it was clear at the beginning of the test when I got the best speeds  and raining at the end) as to any capping.