I sent my Nokia E7 loaner back to WOMWorld/Nokia last week and I was sad to see it go. The E7 is not perfect but my overall experience with it was very good.

The E7 is the successor to Nokia’s successful Communicator series (image of 1998 9110 Comunicator below) which were clam-shell devices featuring a large screen and spacious QWERTY keyboard.   The Communicators were pocket-able devices that provided a near-laptop experience and were popular with professionals who wanted to be able to write, create content and handle a large volume of email on the go. They were also rather bulky, heavy and expensive devices. The first Communicator, the 9000 from 1996, weighed 397g and the last, the 2007 E90 was 210g. 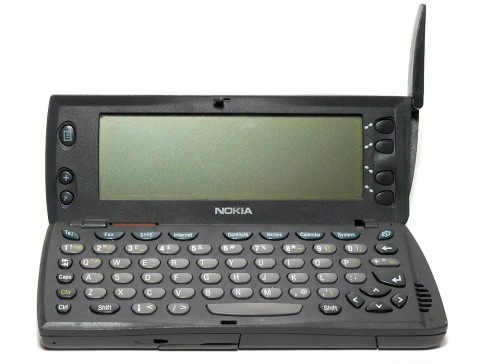 The E7 is a pop-up slider with a form factor similar to the N97 but much slimmer and sleeker than any of the communicators or even the N97.

Appearance: I think the E7 is the best looking phone I’ve ever used.  My trial phone was silver. I usually find silver phones boring, but not the E7. The way the phone’s curves catch the light is quite stunning with a smooth gradation from light to dark that changes as you move the phone.   Closed the E7’s is a  slim metal slab with gently rounded contours and no protrusions to mar the shape.  I especially like the way the buttons are highlighted by a slim chrome-like bezel.

Open, the E7 looks like a little laptop, in fact it reminds me of a tiny MacBook Pro.  Which is high praise, because no matter what you think of Apple, their industrial design ethos is the best in the business.

Size and weight: At 176 grams the E7’s weight is typical of other large screen smartphones that have a sliding QWERTY keyboard.  But it’s noticeably thinner than the competition and fits  easily into a front jeans pocket.

Build Quality: The E7 exudes quality and feels like it’s carved from a single piece of beautifully finished metal.  Whether closed or open there are no creaks or wiggle in the slider.

The sliding mechanism itself seems very well designed and built.  At first I found it a little hard to open but then I discovered the secret.  Pushing parallel to the face of the phone, the way you think the slider should move, doesn’t work very well.  The trick is to push the curved lower edge of the slider down  at a 45 degree angle. It only takes a little push to set the slider in motion, once it starts moving a powerful spring takes over with a satisfying “whoosh” that reminds me of closing a luxury car’s door.

Keyboard: This is by far the best keyboard I’ve ever used on mobile phone.  The key shape, travel and spacing seem nearly perfect. As is the way you can enter numbers and symbols with a long press rather than having to use the Alt key.   I wrote most of the The T-Mobile Astound’s (Nokia C7) PR 2.0 Browser and Email App review on the E7 at CTIA and I rate the E7 keyboard even higher than one on the larger, heavier Zaurus C860 Linux PDA that I used to use for live event blogging.

As good as the keyboard is I do have a minor quibble with it. It works best when you can set the phone down on a flat surface surface and use it like a laptop. The angle between screen and keyboard is perfect for typing while seated at a table.  The same angle is less than perfect for handheld use.  When I’m not able to set the phone on something I prefer to keep the slider closed and use the touchscreen keyboard.  I’d like to see Nokia implement a dual mode slider similar to the one that HTC used on the Touch Pro2 which can either be slid out parallel to the screen for handheld  use or flipped up into an angled position for typing at a desk.

Display: The big 4 inch screen’s Clear Black technology is the real deal and delivers brilliant colors and great contrast with blacker blacks.  True it’s “only” 640×360 but it still looks better to my eye than my wife’s HTC Evo in spite of the latter’s  4.3 inch 800×480 screen.  Performance in daylight is good, even in bright sunlight it’s usually possible to read the screen by tilting it away from the light. It’s definitely better than the N8 and much better than the Evo, but nowhere near as good in harsh light as older devices like the N95 or HTC Magic which had transflective screens that actually got easier to see the more light was falling on them.  Of course the transflective screens don’t look nearly as good as the E7’s in moderate light.

Battery Life: The E7’s battery life is quite good.  The E7 and the N8 use the same 1200 mAh battery but the E7’s larger screen means that its battery life will be a little less than the N8’s. But it’s still good, at CTIA, I used the E7 quite heavily for photos, note taking and email.  The Email app was polling every 15 minutes and Gravity was aso checking for new tweets every 15 minutes and I had Gravity’s push notifications turned on too.  In spite of the rather heavy use the battery always made it through the day.  I made hardly any calls however and didn’t use the browser much. Although the battery life is good, the E7’s non-removable battery may be a concern for serious road warriors.

Camera: I found the E7’s EdoF camera better than I expected.  I actually got a much higher percentage of decent photos with the E7 than I do with the N8. That’s not because the E7’s camera is better though.  I’m a point and shoot photographer at best and tend to rush things and not focus properly. With the E7 there’s no focusing which suits my lousy technique well. There’s also almost no shutter lag, which I think everyone can appreciate. E7 camera comes into its own with video. EdoF keeps everything from about three feet to infinity in focus and low light performance is pretty good too.  Here’s an indoor video I shot of the T-Mobile Astound announcement  at CTIA.

Where the E7 camera falls down is with closeup work.  There’s no macro mode and everything closer than about three feet (1 m) is out of focus.  I was unable use the the E7 to take readable photos of documents. I did find I could scan QR codes that were at least an inch (25 mm )across successfully but a half-inch (12 mm) QR code on a Nokia employee’s business card was unreadable.

I’m a little concerned about the unprotected glass cover over the camera lens which appears to be flush with the back surface of the phone. To its credit, mine didn’t show any scratches after two weeks of hard use but I have to wonder about the long term.

Software: Frankly I’m tired of Symbian^3 in it’s PR 1.2 form.  The new firmware on the Astound has spoiled me, everything works better on it, the user interface is much more responsive, Gmail and the browser are finally usable and the split screen portrait QWERTY rocks.  I can’t wait for the PR 2.0 update.  If it’s anything like the Astound firmware it will totally transform the E7 and other Symbian^3 phones.  At CTIA I heard from one of the E7 product team members that PR 2.0 is only “a few weeks away”. Nokia’s track record on delivering updates hasn’t been great but lets hope that “few” in this case means less than a month. Another beef I have with the software is the lack of a spell checker in the QuickOffice app. I realize that QuickOffice isn’t a Nokia product but this is the first Symbian version of Quick Office Premiere I’ve seem that doesn’t have a spell checker

Conclusions: Is the E7 a good phone? I think it is provided it meets your needs.  I believe that Nokia’s goal was to recreate the Communicator in a thin, stylish and modern form and at that they succeeded.  Every device’s design is a series of compromises.  To combine a great screen and keyboard with thinness and a sleek look, the E7 gave up a removable battery, memory card slot and auto-focus camera. These aren’t necessarily show stoppers.  For many the E7’s battery life and 16 GB internal Flash drive will be enough and there are ways around the limitations. External battery packs are quite light and compact  and can double run time. The E7 comes with a USB On-The-Go cable that lets you use a thumb-drive as external memory. The iPhone doesn’t have a removable battery or storage either and I don’t hear a lot of complaints about either from the legions of iPhone users. The E7’s camera takes great pictures in most situations but if you need to take closeups you will need to carry a real camera or a second phone.

The E7 is now available in most countries. In the US the best price seems to be at Amazon where it’s currently $599.00 with free shipping.