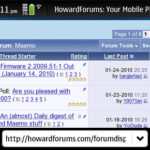 Every new phone has a learning curve, however brief.  When I got my N900 I expected to have to put a fair amount of effort into figuring out how to use the device.  After all this was not only a new handset for me but I’d never used  Maemo before. Plus, I’d heard that the N900 was a geeky device, not really suited for normal mobile users. OK, maybe I am a geek, but I think I got up to … Continue reading → 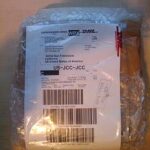 Nokia’s WOMworld has sent me a Nokia N900 to review. Over the next week or two, I intend to cover this groundbreaking device in depth, focusing first on the N900’s Web browsing capabilities using the built in MicroB browser plus Firefox Mobile and any other third party browsers I can find. I’m not sure how long I get to keep the N900 but if I have time I’ll also highlight Web apps that are particularly useful on the device and … Continue reading → 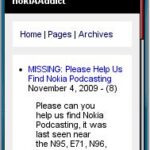 Gerry Moth’s nokiAAddict.com is an indispensable site for Nokia and Symbian users whether they are actual addicts or just trying to get their phones to do what they want them to. Gerry reviews the latest hardware and software but the best part of the site for me is its directory of S60 3rd and 5th apps. When you need an an app, avoid the frustrations of the Ovi Store and doggy download sites and head directly to nokiAAddict’s Downloads page … Continue reading → 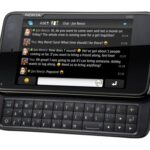 I had a great time at yesterday’s N900 meetup in San Francisco.  It was organized by N Series US‘ Matt Bennet and TnkGrl Mobile‘s TnkGrl and sponsored by Nokia who graciously picked up the bar tab and provided a couple of N900’s to play with. Matt posted some photos of the meet up and Tnkgrl’s video coverage is on her blog. The N900 is a fantastic device that really feels more like a computer than a phone.  Mathew and Tnkgrl … Continue reading → 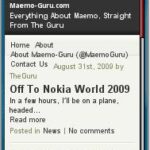 There’s one handheld device electronic device that I use quite a bit that’s not a mobile phone, it’s a circa 2003 Sharp Zaurus C860 (image below).  This Japanese market-only device was sold as a PDA but is in fact a mini-notebook.  It runs a Linux kernel with a QT user interface. Easily converted  to English it’s also a hacker’s dream with wide open hardware and software. I use mine for mobile blogging at events and while traveling. The Zaurus has … Continue reading →

I spent the day at MobileCampSF, A BarCamp “unconference” focused on mobile development and monetization. MobileCamp is a a loosely structured gathering open to all mobile enthusiasts. Anyone can present on any mobile related topic in whatever format they desire. MobileCamps have been held in New York, Los Angeles and San Francisco. The first San Francisco Camp was a great event so i was eager to attend today’s sequel. I wasn’t disappointed, MobileCamp was expertly organized by Indira, Ritwik, Andy … Continue reading →