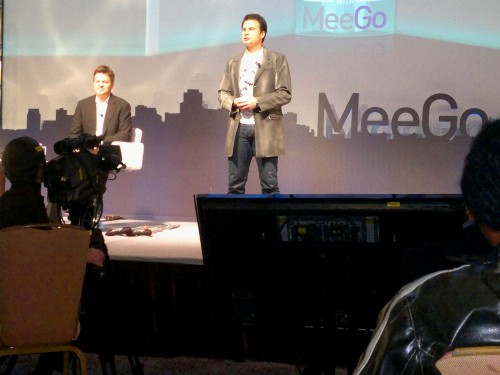 My mobile dream is a handset with the full power of desktop Linux and X-Server. I saw that realized with Nokia’s Maemo. The N900 was an amazing device when it was introduced 3 years ago. But today it’s starting to show its age in areas like performance, screen technology and unfashionable thickness.

I was very excited to have the opportunity to attend the MeeGo Conference in San Francisco because  I expected that the N900’s successor would released or at least announced there. I also hoped to see new MeeGo phone or two from other vendors.

There were a lot of exciting rumours leading up to the conference including a leaked Nokia video showing the unreleased N9 phone running Harmattan, Nokia’s next generation of Maemo which also includes MeeGo API support. Another rumor had LG announcing a phone at the conference. The Maemo/Meego community was wild with anticipation. A thread discussing the leaked video and the N9 on the Maemo Talk forum garnered over 2600 posts in two weeks.

The reality of the MeeGo Conference was that no new handsets were shown or announced. Although Nokia was a major sponsor of the conference, there was almost no mention of Nokia or of MeeGo handsets in the Conference keynote.

I’m not sure what happened. I do believe that the N9 announcement and release is still imminent. The conference seemed like it should have been the ideal place to announce it. The developers and fan base were there in force with at least half the attendees carrying an N900. But something got in the way.

The N9 rumour seemed especially credible because of the leaked video. Several prominent members of the Maemo Talk community claimed to have inside information that the N9 would appear and might even be given to attendees. But Nokia seems to have decided to delay the announcement. Perhaps the N9 release is seriously delayed. Or maybe open source politics got in the way. The new phone runs Nokia’s Harmattan blend of Maemo and MeeGo rather than pure MeeGo and that may have ruffled the feathers of MeeGo’s other sponsors.  I think a likely explanation is that Intel didn’t want to showcase a product running a processor from arch rival ARM.

Although not related directly to handsets, there were a number of significant announcements at the MeeGo conference. The biggest was probably Nissan announcing that it would be using MeeGo in future vehicles.

MeeGo 1.2 was released for Netbooks, Handsets, Tablets and In-Vehicle Infotainment (IVI) systems. The new release focuses on stability and adding low level functionality to the MeeGo Core rather than UI changes. Nokia also released the MeeGo 1.2 Developer Edition for the N900. Tablet vendors 4tiitoo (WeTab), Linpus, China Standard and Red Flag Software all announced that they would adopt MeGo 1.2 for their next releases.

There were many vendors showing off interesting products in the tech showcase area of the Conference.  I was particularly impressed with Nomovok‘s Steelrat, a MeeGo compliant custom UI layer targeted at OEMs. Steelrat is highly customisable Meego front-end optimized for touch, graphics and animation. According to Nomovok’s Tatu Nieminen, Steelrat is being used in numerous MeeGo based tablets, handsets and in-vehicle systems that are soon to be launched soon by some very big name companies.

I also got to play briefly with a new tablet from i-Buddie at the Conference.  It’s one of the first devices to use Intel’s new Oaktrail Atom CPU which has performance comparable to the Pinetrail processor used in the ExoPC while consuming only half as much power.  The i-Buddie is a bit smaller and much lighter than the Pinetrail powered ExoPC, but the claimed battery life is still on the low side at 4-6 hours of “active use” vs 4 hours for the ExoPC. Update: @tnkgrl pointed me to Chippy’s blog post which has a video of of the i-Buddie in action. The post reveals that the i-Buddie is also known as the ECS S10 and has a quoted weight of 660g, which is in iPad2 (605g) territory and far less than the ExoPC’s 950g.

I guess I will have to wait a bit longer for my N900 replacement.  I was assured by several Nokia folks at the Conference that it will arrive this year. Unfortunately, other than the vague and unrealized rumor of an LG MeeGo phone, no other handset vendor seems committed to MeeGo currently.  I think that will change when Intel finally delivers on their promised handset CPU, but that won’t happen before next year.