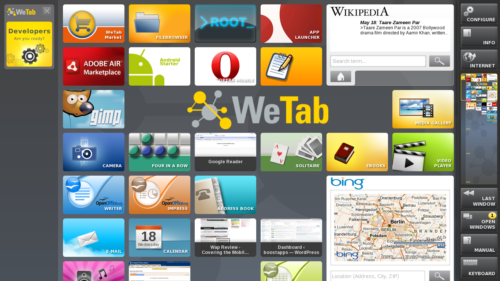 The WeTab is a MeeGo tablet from Munich based  4tiitoo AG. The tablet’s hardware is similar to the ExoPC MeeGo tablet that I got at an Intel developer event recently.  Both tablets are manufactured by Pegatron, a division of ASUS. The only hardware differences are that the WeTab has less RAM (1GB vs 2GB) and a smaller solid state drive (choice of 16 GB or 32 GB vs 64 GB) and the fact that the WeTab can optionally have a 3G radio and GPS.

I’ve been running up against some of the pre-alpha limitations of the official MeeGo project tablet release. I was eager to try the WeTab OS which can run on the ExoPC and supposedly provides a more polished, consumer oriented experience.

Installing the WeTab OS on the ExoPC turned out to be easy thanks to a handy guide (with video) that I found at Maemo/MeeGo guru zehjotkah’s site meetmeego.org. The process is similar to updating to a new MeeGo build on the ExoPC : 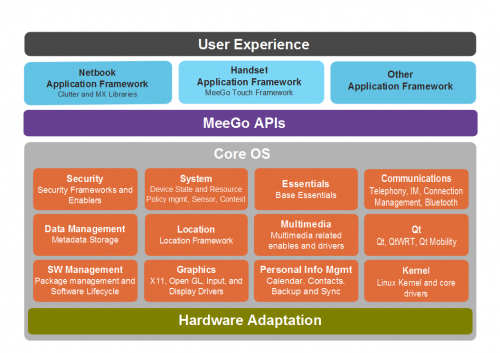 I was pretty impressed with the WeTab OS which combines the MeeGo core OS and API layers with a custom application framework and user interface. It’s fast, attractive and highly usable.

The WeTab home screen holds rectangular widgets which can be app launchers or Internet shortcuts or can hold interactive content like the Bing maps widget that comes with the WeTab (image top). You can rearrange the widgets and delete ones you don’t need. There’s a permanent sidebar on the right that provides instant access to the home screen, touch keyboard, the Web browser and important settings.

Apps created or customized for WebTab create a second sidebar on the left containing their controls and menus.  Custom apps bundled with the OS include a Calendar, File Browser, Contacts, Media Gallery, Video Player, Camera, Chrome based browser and customized versions of the Claws Email app and  FBReader eBook reader (image  above right). A vanilla copy of Open Office is also preinstalled.

The best thing about the Wetab is that you aren’t limited to WeTab or MeeGo apps.  The WeTap Market (image above, left) contains dozens of apps most of which are mainly unmodified versions of popular Linux apps like the Gedit text editor, Gimp image editor and Thunar file browser.

Apps run in movable re-sizable windows and use the very nice touch keyboard (image above right) which appears automatically when tapping a text field in most apps and can be opened manually by tapping a button in the sidebar. The keyboard isn’t re-sizable but can be dragged anywhere on the screen so that you can always see what you are typing. There are four keyboards in all containing all sorts of special characters, arrow keys and cut, copy, paste, undo and redo keys that work in most apps.

You can also install many Linux apps that that are distributed as RPM files. First install the “Root Terminal” from the WeTab Market.  Then download the app you want to install, open the terminal (image above, left) and:

First I installed Opera Mobile 11 from labs.opera.com/news/2011/03/22/. It’s touch friendly and features the ability to save pages for offline reading, FTP:// support and bookmark backup and sync, all of which the WeTab browser lacks, but doesn’t do Flash.

The WeTab browser is Chrome based, nicely touch optimized, supports Flash and works well, but it doesn’t support Chrome extensions or sync. So I also installed Chrome 11. Here’s how:

Download the “32 bit .rpm (For Fedora/openSUSE)” from http://www.google.com/chrome using the WeTab browser.  Chrome requires the lsb (Linux Standard Base) library.  To install it open the terminal and type:

Generic apps like Chrome 11 don’t have launcher widgets on the WeTab home screen.  You launch them from the App Launcher app (image, above right).  The new Angry Birds Webapp (image below, left) runs in Chrome 11 on the Tablet. It’s a little on the slow side but definitely playable.

Apps like Chrome, Gimp and Open Office aren’t touch optimized but I didn’t have much trouble using them on the WeTab.  The large screen makes it reasonably easy to hit menu pads and small buttons. A few tips:

The WeTab can run Android apps too. There’s an Android Starter app in the WeTab Market that runs the AOSP version of Android 2.1 in a windowed VM (image below, right). It works, but is rather slow especially responding to touch events and I found it frustrating to use.

I really like the WeTab OS. It’s the first x586 Linux/X-Windows distro I tried that’s fully usable on a touch screen. And it’s attractive,  intuitive and stable. It doesn’t intimidate non-technical users, yet power users have the full power of Linux apps and the shell just a tap or two away.  A very impressive accomplishment by a small company.

For now I’m using  WeTab as the main OS on my tablet. I’ve set it up to double boot into the MeGo Tablet OS so I can the track the progress of that project and report bugs, but for getting work done WeTab OS is the one I’ll be using.

3 thoughts on “Running The WeTab MeeGo OS On The ExoPC”