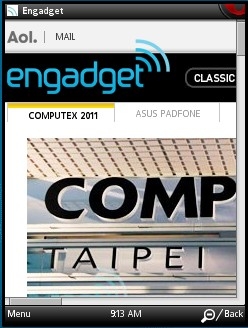 Engadget is my favorite source of news about all sorts of tech including mobile devices, platforms and apps. I was a little worried when AOL acquired Engadget and many of my favorite writers left.  But the new crew at Engadget is great, they’re delivering lots of well written and well edited breaking news stories, reviews and great photos and videos of the latest gear.

I like Engadget’s mobile site at m.engadget.com too. Well actually I like it in most mobile browsers but not in the one I use most often, Opera Mini.

The problem is that when Engadget Mobile sees Opera Mini it cranks pagination up to the max for some reason. Articles that Opera Mini could easily load in their entirety are broken up into multiple tiny ones – really tiny ones.  A typical Engadget item that loads as a single page in the Android or iOS browser is seven pages in Mini. That really slows reading down as Mini has about 10 seconds of latency before it starts to load any page, even a small one.  On a fast connection it takes Mini about 10 seconds to load each little page when it could load the whole thing as a single page in the same ten seconds!

So I created a bookmarklet to fix that.  To use it copy the code below and save as a browser bookmark:

Whenever you land on Engadget Mobile open the bookmark and you will be transported to the full version of the same content with no pagination. The bookmarklet has been tested in Opera Mini but it should work in most browsers that support bookmarklets including recent versions of Mobile Internet Explorer, Apple Safari, Palm Blazer, Opera Mobile, the Android browser since Froyo and Symbian Webkit since S60 5th ed.

If you’re using a browser that doesn’t support copy/paste, like Opera Mini 4 or the Symbian browser, click here and follow the instructions on that page to add the bookmarket.

Hopefully Engadget/AOL’s web wizards will fix their mobile site to stop unnecessarily splitting posts for Opera Mini users.  In the meantime you can use the bookmarklet.

Update: a couple of  weeks after I posted this, Engadget modifier their mobile site, when viewed in Opera Mini, to include a “Desktop” link. Clicking the link takes you to the desktop version of the mobile page you were on.  This bookmarklet is no longer needed, in Opera Mini, at least.

Update: 20-Jul-2012 – Engadget has modified their multi-serving logic and this bookmarklet no longer works. For a one that does see: Son Of The Engadget Demobilizer – A New Bookmarklet To View Engadget’s Desktop Version In Opera Mini