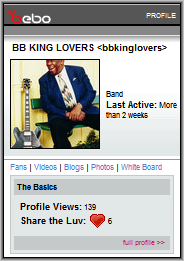 I first heard of Bebo about a year ago at the first San Francisco Mobile Camp. Bebo’s Jordy Mont-Reynaud gave a presentation titled “What’s The Killer App in Mobile Social Networking?”  I was impressed with Jordy’s talk, he really seemed to understand how to work within the constraints of mobile.  One of his major points was that mobile services must be  affordable to users.  Jordy advocated using bandwidth sparingly and having both an SMS based platform for users with messaging packs and a mobile web alternative for those with (hopefully unlimited) data packages.

A year ago, Bebo was looking really strong; the full web version of Bebo was the top social network in the UK and number three in the world.  Bebo had just launched  SMS based and mobile web versions, although at that time they were only available on-portal and only from one operator, the UK’s Orange.  The Orange deal, which is still active, is interesting.  For £3/month Orange Pay As You Go customers get unlimited use of the Bebo Mobile site plus unlimited SMS messages and alerts to and from Bebo. In Jordy’s presentation, he said the mobile site was scheduled to be available off-portal from any network by the end of 2007.

In the last year, Bebo seems to have  lost some luster and market share, giving up first place in the UK to Facebook and dropping to sixth place worldwide.

The full web version of Bebo offers a lot of functionality in an attractive format.  All the usual social networking features are there: friends list; public, private and semi-private profiles which are customizable with skins, music and videos; status messages; blogs; comments and groups.  There’s messaging within Bebo as well as integration with AIM, WIM and Skype. 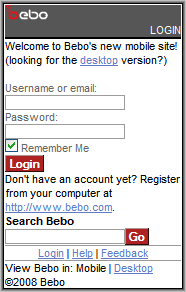 Like MySpace, Bebo caters to and is popular with musical groups.  There’s a special profile for bands.  On band profile pages users sign up as “fans” rather than “friends”.  Band sites on Bebo include demo tracks and music videos and users can opt into receiving promotional messages and newsletters from the band.

Bebo is one of the best connected of social networks, besides the IM itegration, it’s an inaugural member of both  Google sponsored OpenSocial and Yahoo’s OneConnect.

The mobile site has a clean, simple design that is easy and fairly intuitive to navigate.  Unfortunately, like the mobile versions of most social networks that started out on the non-mobile web, it’s a rather limited subset of the features available in the full version.

The mobile site lets you the following:

What you can’t do on Bebo Mobile:

I hope Bebo Mobile will be updated to add some of the missing features.  All of them except the apps seem doable for mobile. I do have some doubts that struggling AOL will commit the resources to really make Bebo Mobile what it could be.  Fortunately, Bebo allows mobile users access to the full version of the site.  When you first connect to Bebo.com with a mobile device (including iPhones!) you land on the mobile site. But right at the top of the page there’s a link to that “desktop version”. Of course, you do need a capable full web browser like S60WebKit, Opera, Netfront or Safari to even load the full version of the site, but I applaud Bebo for at least giving users this choice.

3 thoughts on “Bebo Mobile by AOL”