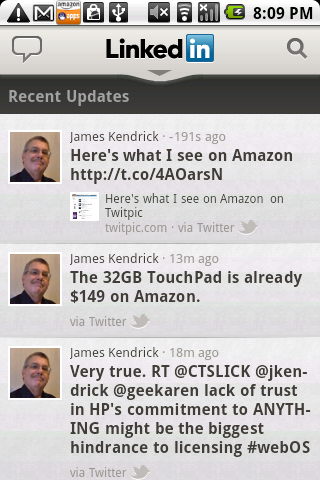 Until recently LinkedIn, the social network for business professionals, had a basic but usable mobile web site at m.linkedin.com. It worked with most mobile browsers and let you build and manage your network of contacts, search the LinkedIn user base to find prospects, jobs and employees and send LinkedIn invites.

Recently LinkedIn’s mobile webapp was updated. According to an interview on VentureBeat, the new one makes extensive use of HTML5 and node.js and shares much of its code with Linkedin’s Android and iOS apps, which were also updated. In a blog post, LinkedIn’s Kiran Prasad mentions that the new webapp is intended for iPhones and Android devices

I was curious to see how this worked so I headed to touch.linkedin.com, which is LinkedIn’s new mobile home on the web. I don’t have an iPhone but I do have a couple of rather dated Android devices: 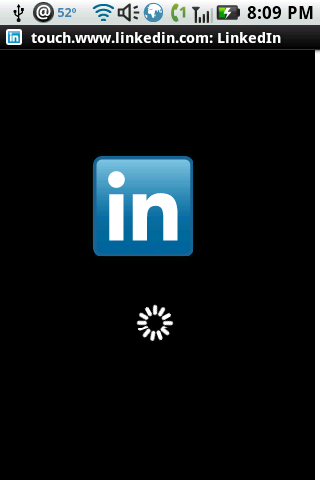 Aparently the new webap either only supports the latest iOS and Android browsers or is broken outright.

But what about the old m.linkedin.com mobile site? Surely you can still use it with browsers that the new one doesn’t support. Unfortunately you can’t.  The old site is gone now and the URL redirects mobile browsers to either the new touch site or to LinkedIn’s desktop site.

I tried going to m.linkedin.com with my motley collection of not quite mainstream mobile browsers with the following results:

So it looks like LinkedIn has built a webapp that only works with a subset of devices that can also run the LinkedIn Android and iOS native apps. That doesn’t seem to add much value or to be the best use of the web, which with a bit of effort has the potential to work with all browsers.

While I think it’s great that LinkedIn is willing to experiment with the latest cutting edge mobile web technologies, this redesign leaves behind millions of LinkedIn users who do not have a supported  phone. I’m disappointed that LinkedIn didn’t at least maintain the legacy mobile site as a fall back for users whose browsers the new one doesn’t support.

15 thoughts on “Linkedin’s HTML5 Webapp Is A Disappointment”