If you are one of the lucky few to have the new Symbian Anna on your Symbian^3 phones get ready to wave it goodbye.  Today Nokia officially announced Belle, the next version of the Symbian OS today.  Nokia also announced three new phones that will come with Belle and will be available “this quarter”, or sometime in the next six weeks.

Belle will also be delivered to the existing Symbian^3 devices (N8, E6, E7, C6-01, C7 and X7)) but that update won’t begin rolling out until sometime in the fourth quarter. If this update is typical that means that it will be well into 2012 before all eligible devices get the new OS.

Anna brought us a new browser and email client and made the Symbian UI much more responsive. Belle is the long awaited Symbian user interface overhaul (see the UI walk through video above.  Belle highlights include: 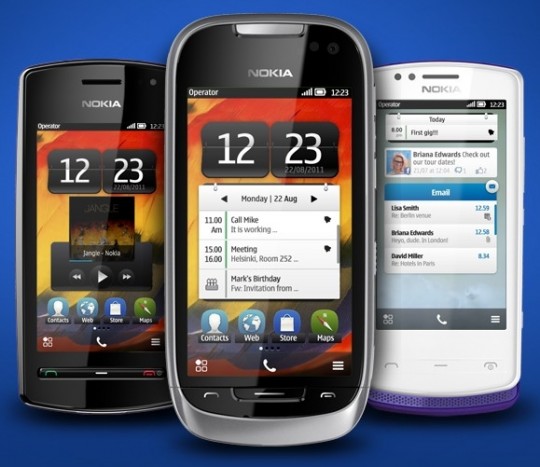 The new phones all have EdoF cameras and hardware performance enhancements, they are the:

The most interesting thing about these new phones is that they appear (at least on paper) to be the fastest Symbian devices ever.  All three feature a new 1 Ghz processor (up from 680 Mhz), faster (HSDPA Cat 10 – up to  14.4 MBps,) 3G radio, a graphics processor that’s up to four times faster than the one in previous Symbian^3 phones and 512MB of RAM, twice as much as any other previous Symbian phone.

I’m glad to see Nokia continuing to pump out enhancements to the Symbian OS even though they have announced that it is at EOL with no new devices after 2012.  After waiting an eternity for Anna (and I’m still waiting for it on my US version N8) it’s exciting to think that Nokia plans to roll out Belle in a much more timely fashion. I’m particularly looking forward to the new notifications system.  It appears to be very similar to the way notifications work in Android and that’s a good thing.  Putting a visibile indicator of all notifications in a status bar that isn’t hidden by application windows is Android’s best UI innovation.  There’s nothing wrong with copying the best.