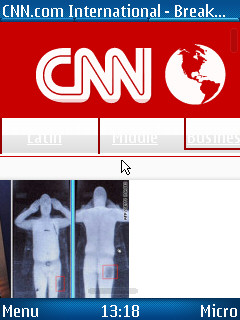 The Windows Mobile and UIQ Beta’s can be downloaded here. The S60 Widget Manager is only available as part of the Widget SDK which can be found here.

The key feature of these new releases is widgets.  The Windows Mobile and UIQ Betas provide run-time support for Opera Widgets.  These are similar to Nokia, Access Netfront and Motorola’s widgets – applications built with HTML, CSS and JavaScript that depend on a browser based run-time.  The neat thing about Opera’s Widgets are that they are cross-platform, they run in Opera for Windows, Apple and Linux, the Nintendo Wii game console, some Archos Media players and now on Windows Mobile, UIQ and S60.  Initially not all of the approximately 1000 Opera Widgets will run on the new mobile platforms.  Widget developers have to do two things turn existing Opera Widgets into “X-Widgets”,  Opera’s name for cross-platform widgets.  Controls, fonts, images etc have to be adjusted do they display properly on the smaller screen.  In many cases this can be done by modifying the widget’s CSS file to load different resources dynamically using Media Queries.  Once the developer gets everything looking right on mobile they just need to resubmit the widget to widgets.opera.com and add “mobile” to the supported platforms on the submision form.  To date there are 12 widgets approved for the mobile platforms.

I’ve been salivating over Opera Mobile 9.5 ever since the first Beta was released for Windows Mobile back in July.  Opera Mobile 9.5 has gotten some rave reviews. In theory it should be the best Opera mobile browser yet,  combining the latest rendering engine with support for Ajax, SVG, HTML5 and CSS3, the robustness of a standalone browser and the slick UI of Opera Mini.  Unfortunately I don’t own a Windows Mobile phone so I haven’t been able to try 9.5 other than a few minutes playing with it on the HTC Touch Diamond and Sony Ericsson X1 at CTIA.

I do have a UIQ 3.1 device, a Motorola Z8, so when I heard that there was a new UIQ release I got excited.  Then I read “touchscreen only” and knew I was out of luck as the Z8 is one of only two non-touchscreen UIQ phones.

Although there’s no 9.5 Beta for S60 yet, there is something Opera calls a “Widget Manger” which I’ve been playing with today. What’s a Widget manager?  In Opera’s case it’s a web run-time that supports Opera Widgets and includes a GUI for finding, downloading, managing and launching widgets.  It’s almost a browser, widgets running under the Widget Manager can load and render web pages.  There’s no field to enter arbitrary URLs and no bookmarking support so you are limited to the web content that current widgets link to – which at the moment seems to be Wikipedia and Yahoo Answers.  I wonder how hard it would be to create a widget that functioned as a rudimentary browser? 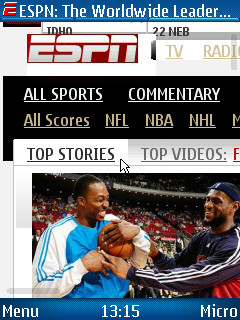 The Widget Manager is a Symbian S60 .sis file. It doesn’t seem to be available as a standalone download. To get it you have to download the Widget SDK which provides documentation, code samples, an emulator for testing widgets on the desktop and the Widget Manager .sis.  The SDK download is a .zip file.  The Widget Manager is in the util\manager directory and is named Opera_Widgets_Manager_9.50-141.sis.  Install it to you phone using Bluetooth or with PC Suite.  When I tried to install it, I initially I kept getting an “Update Error” from the S60 Installer program.  This seems to be related to having Opera Mobile 8.65 installed on the phone.  I removed 8.65 which was an expired evaluation copy and the Widget Manager installation proceeded smoothly. Unlike some S60 applications, the Widget Manager seems to work equally well whether its installed on a memory card or in main memory.

The Widget Manager comes with four Widgets pre-installed and there are eight more that can be downloaded using the Widget Manager’s “Add Widget” function, which is itself a widget.  I particularly like the Accuweather Widget. It compares favorably with the similar Nokia  Weatherbug Widget.  I thought the Opera widget was much more responsive, updating and switching views more or less instantly unlike the Nokia one which is quite sluggish.

On the other hand, the Nokia widgets have a big advantage in that they appear as standalone applications with their own icons on the S60 desktop. Opera’s mobile widgets (at least in the current S60 Beta) live inside the Widget Manager.  You start the Manager then choose and launch a Widget just like you do with  Java ME based Widget platforms like Widsets, WebWag or Plusmo. According to the SDK documentation, this is a temporary limitation, future releases will support stand alone widgets which will even be capable of running on the phone’s idle screen. 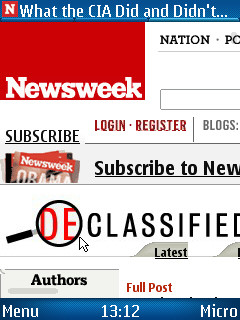 Most of the current widgets display a limited amount of web content themselves and have hyperlinks that launch the phone’s native browser to display additional data. As I mentioned earlier, the Wikipedia and Yahoo Answer’s widgets function more like dedicated browsers.  You search for a Wiki page or Yahoo answer and the widget loads a summary page with hyperlinks that load the Wikipedia and Yahoo Answers web pages right in the widget rather than in S60Webkit.  This ability to load web content seems to be limited to links that are on the widget’s respective (Yahoo or Wikipedia) domains.  I tried loading Wikipedia’s entry for Google and clicking the google.com link at the bottom of the page in an attempt to get out to the wider web using the widget engine.  It didn’t work, Google.com launched in S60Webkit rather than the Widget Manager.

As an early Beta targeted at developers, the Widget Manager seems pretty capable and stable.  I played with it for several hours and had only one crash.  Not surprisingly, there are are some bugs.  The most noticeable one is mentioned in the SDK’s known issues list; when a widget is retrieving web content to render internally,  the S60 native browser still launches and comes to the foreground, obscuring the widget. You have to use the S60 Task Switcher (long press on the menu button) to get back to the Widget to view the content.  There are also some scrolling and cursor control issues in some of the widgets, but for the most part the S60 widgets are quite usable.

Developing widgets looks to be pretty easy for anyone who has done a little web development.  The SDK has some good introductory documentation and there is an excellent video “guided tour” walk though of the creation of a “Hello World” widget.

It you need a little encouragement to develop Opera X-Widgets, there’s a developer’s challenge, the “X-Widgets Challenge” with the top three widgets getting $5000, $2000 and $1000 respectively. Plus the best widget each week gets a $300 price and the first 20 developers to submit a widget win a $50 Amazon gift card and a t-shirt. The deadline to submit widgets to the Challenge is November 23rd, 2008.