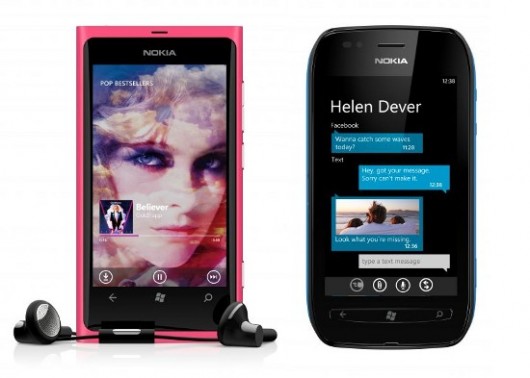 Today at Nokia World in London, Nokia announced its first Windows phones, the Nokia Lumia 800 and the Nokia Lumia 701. I wasn’t able to make it to London but Nokia held a press event at their US headquarters in the Silicon Valley today where I got a chance to see and try both phones. Here are my first impressions.

The Nokia 800 (above, left; below, right) is the higher end of the two. It is a gorgeous device with a quality feel. Externally it’s almost identical to the N9 MeeGo phone (below, left). Like the N9, it has a one piece polycarbonate body with a non-removable battery and a glass screen that is smoothly curved into the body at the edges. The only physical differeces I could find between the N9 and the 800 are that the Windows phone has a physical camera button and a slightly smaller 3.7″ vs 3.9″ screen to make room for the three standard Windows phone capacitive buttons. 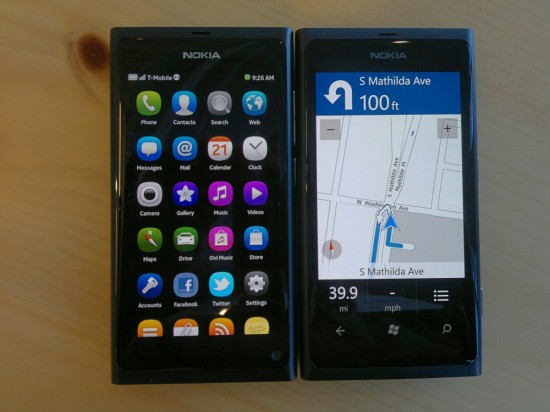 The 800’s camera has nearly identical specs to the N9 too; 8 MP, autofocus, Carl Zeiss lens and dual led flash.

The software on the 800 looks to be Standard Windows Phone Mango with the addition of a couple of exclusive Nokia apps.

Zooming and scrolling in Drive’s maps was very snappy with no noticible lag. The same was true of the entire Windows Phone interface on the 800. There was no hesitation when switching from screen to screen or scrolling.

Priced at 420 EUR ($584) unsubsidized, the Nokia 800 will be available in France, Germany, Italy, the Netherlands, Spain and the UK in November and in Hong Kong, India, Russia, Singapore and Taiwan by year end.  UK customers can pre-order a Lumia N8 now.  If your willing to sign a two year contract at 30 GBP or more you can get the Lumia 800 for free! That’s typical of the UK operators who subsidize phones much more heavily than their US counterparts.

US availability was not announced although Nokia did say that a “portfolio” of Windows Phones would be offered in the US early in 2012 and that it would include GSM, CDMA and LTE models.

Nokia’s unique Pentaband 3G radio is missing from the 800 possibly due to limitations with the Qualcomm Snapdragon SOC that Nokia is using.  There is quad band (850, 800, 1900, 2100) 3G support. This means both of AT&T’s 3G bands are covered but not T-Mobile’s unusual 1700/2100 combo. I suspect that there will eventually be Nokia Windows Phones with support for T-Mobile USA’S 3G band.

The Lumia 710 is the value offering on the Lumia line.  Priced at 270 EUR ($375) it gives up very little in specs or performance compared with its higher priced sibbling. Both phones use the same 1.4 Mhz single core processor and 512 MB of RAM, both have 3.7″ 800 x 480 px ClearBlack screens and an auto-focus camera and both include the Nokia Dive and Lyric apps.  The main differences are that the 710’s screen uses  less expensive TFT LCD vs AMOLED technology, the camera is 5 MP instead of 8 MP and has a Nokia rather than a Carl Zeiss lens, there’s 8 MB of storage memory rather than 16 MB and the battery is smaller but removable.

When I tried the Lumia 710 its performance seemed just as snappy as its pricier brother. The lower spec screen might not have been quite as bright but I really notice the difference. Although I’ve heard the 710 described as “clunky” I really can’t agree.  While it’s not as elegant or as expensive feeling as the 800, its lighter and only insigniffigantly thicker (a third of a millimeter, about the thickness of a business card) and is eminently pocketable.

The Lumia 710 will be available by year end.  It will be offered initially in Hong Kong, India, Russia, Singapore and Taiwan with other countries getting it later. 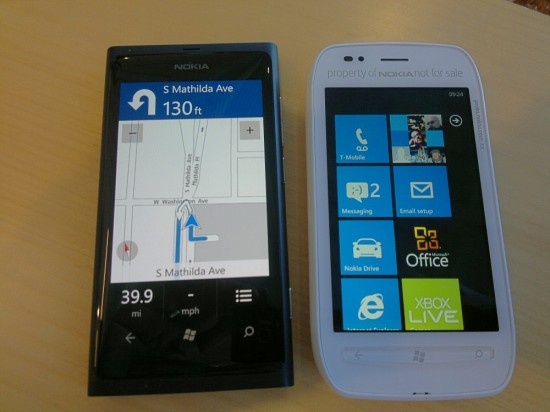 Overall I’m impressed with Nokia’s Windows Phones.  The combination of WP Mango’s ease of use, performance and stability with Nokia’s elegant design sensibility, best cameras in the business,  free navigation and music looks like a winning combination. Personally, I’m especially happy to see the return of auto-focus cameras to Nokia smartphones.  The EDOF (fixed focus) cameras on the E6, C7 and E7 worked very well for general photography and videos but their inability to shoot closeups made them unusable as the main camera for a blogger who sometimes needs to photograph phones.

4 thoughts on “Hands on With Nokia’s New Windows Phones”