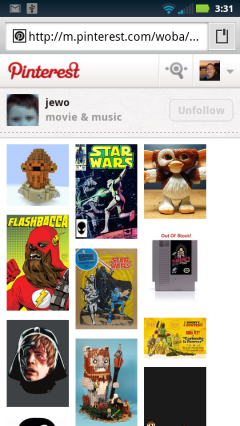 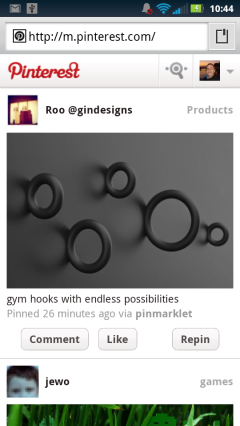 Pinterest is a social media startup that is quite the rage at the moment, especially with women. According to Comscore (by way of TechCrunch) it went from zero to 10 million monthly unique visitors in 20 months, faster than any site ever. All the more surprising as the service is still in private Beta. Potential members must be invited by a current user or request an invite. That makes it sound pretty exclusive however I received an invitation less than 24 hours after requesting one.

Pinterest is a webapp on the desktop. There is an iOS native app and a mobile webapp which seems to be optimized for Android, although it can be accessed with any browser by visiting m.pinterest.com.

Pinterest’s mobile webapp is not dumbed down. It mirrors the desktop site’s work flows and appears to retain all the features and functionality of its big brother but with a (mostly) single column layout.

When you login to Pinterest’s mobile site your are greeted by a “pin feed” displaying the latest pins by you and users you follow (image above, right). Each pin has buttons that let you comment on, like or re-pin it or open its pin board (image above, left). Drop down menus let search and browse for pins and users and get to your own pins and profile. 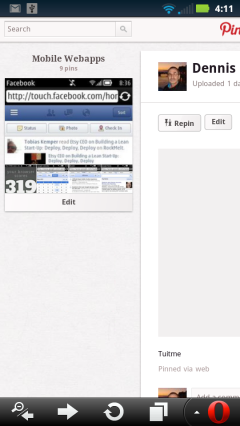 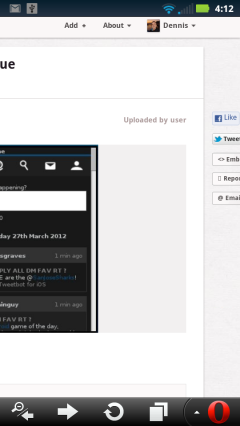 When you click a pin it opens in a screen that lets you work with that pin. The screen scrolls sideways to reveal menus controls on either side. Scrolling right exposes an icon on the left that displays which pinboad the pin belongs to and lets you edit the pinboard’s name and description if it’s yours (image above, left). Scrolling left exposes buttons that let you work with the pin itself (image above, right). You can add a comment, share the pin on Twitter or Facebook or by Email or report it for copyright infringement, spam or for violating Pinterest’s TOS which prohibit hate speech, personal attacks and nudity among other things. Another button lets you grab code for embedding the pin in another site. If it’s your pin you can edit its name, description and the URL that opens when someone clicks the pin.

While I like the Pinterest mobile webapp’s overall design, usability and full feature set, I did have some problems using it.

Pinterest’s mobile webapp is as powerful as the desktop version and has some nice design and usability touches. But the slow page loads and numerous the bugs make it ultimately frustrating to use. 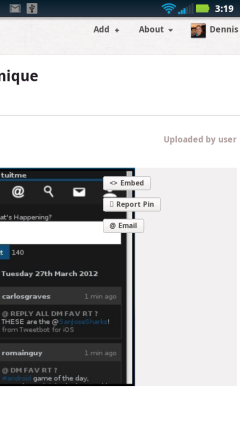 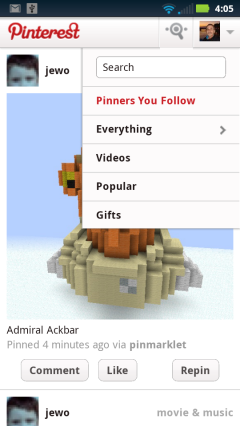