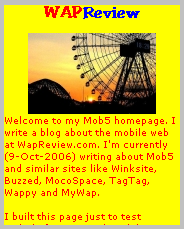 Mob5 isn’t really a pure Mobile Social Software (MoSoSo) site although it bears some similarities to one. I’d call it a forms driven mobile site builder and free mobile hosting service. It lets you build a site to share your writing and photos. There’s a comment form that you can add as a “wall” or shout-box were anyone can leave (and read) comments. Mob5 is good for building a site where your friends can look at your photos or writing and leave a message or click to call you. Pages can be password protected to keep the world at large out. But unlike a true social networking site there is no way within the site to find other Mob5 users or to grant access on a user by user basis.

Mob5 is also a good choice for a small business looking to build a promotional site.

After registering at Mob5.com – which only asks for an email address – you create a site using a very nice online editor which lets you add pages and elements to each page. The available elements are text blocks, images, the comment form, mobile web links, “click to call” phone number links and an email link which is just a mailto:// uri and thus will only work on phones with a built in email client. You can put any combination of elements on a page – there is no specific photos page, for example but you can easily create one. You can control text size, background, text and link colors and center, left or right align elements. Everything can be moved around and tweaked endlessly if that’s your style. The editor is currently a PC web application only but a message on the site promises a mobile editor in “a few weeks”. It’s one of the easiest and most intuitive site builders I’ve used. There’s no need for a manual or help file to figure out how to use it – a good thing because their isn’t any online help. You are limited to only 200 photos per site but can have as many as 500 pages which is more than I think anyone would ever want. URLs are sub-directory style – mob5.com/user_name. Images can be uploaded by email or MMS or directly through the web editor and also via the mobile editor when it’s released. 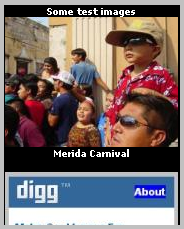 I am impressed with mob5.com’s technology for adapting images to various mobile browser screen dimensions. Mob5 is resizing images to literally the largest exact size that will fit the browser’s screen width. When I tried impersonating various mobile browsers using the the Firefox User Agent Switcher extension Mob5 would deliver the same image resized anywhere from 90 to 183 pixels wide. It worked well, in most cases delivering the largest possible image that would fit the screen without horizontal scrolling. I never got an image that was too wide for the screen. When Mob5 doesn’t recognize a browser it renders images 90px wide which will safely fit on any phone’s screen. Wml-only browsers are supported with a text only version of the site.

Mob5 is less than two years old and doesn’t seem to have really caught on yet. I’d estimate that their are fewer than 2000 mobile sites on Mob5. I think it’s a great choice for anyone who wants to create an attractive, modern WAP2 site with minimal effort. The adaptive image resizing makes it a particularly good way to show off photos on your phone.