Yesterday, AT&T invited me and a dozen or so other bloggers and journalists to a San Francisco Giants game at AT&T Park here in San Francisco. It was a great experience starting with a limo ride to the stadium and ending up with us being seated in AT&T’s corporate box with abundant catered food and beer available. 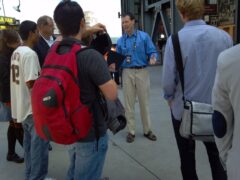 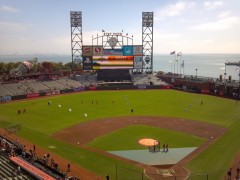 In spite of the Giants losing, I had a great time at the game. But what preceded was interesting too. Our group was taken on a “Behind the Scenes” tour of AT&T Park. But we didn’t see the dugouts, bullpens or other areas of athleticism normally closed to the public. Nope, this was a tour to show off what AT&T and the Giants have done to ensure that everyone who attends a game has great connectivity while in the park

The tour was lead by Bill Schlough, Chief Information Officer for the San Francisco Giants; and Cliff Fitterer, AT&T Assistant Vice President, Radio Access Network Engineering for Northern California who gave us an in-depth tour of the wireless infrastructure at the ballpark.

AT&T Park is one of the few Major League Baseball stadiums that offers free public WiFi to all. WiFi first came to the park in 2004 with the installation of about 100 access points. In the early days, the network typically only saw a hundred or so devices connected during a game, mostly laptops and wireless PDAs. According to Schlough, usage remained low until shortly after the iPhone was released in 2007. Suddenly thousands of iPhone toting fans checking stats and scores threaten to overwhelm the network. Over time the number of access points was  tripled to meet the constantly growing demand and today the WiFi network averages 11 thousand connections per game.

The ballpark is one giant AT&T WiFi hotspot with connectivity provided by 336 access points located in every nook and cranny of the structure. The access points are connected to a sizable server room in the basement which is packed with rack mounted servers, routers and switches. In anticipation of the Giants making the playoffs and hopefully the World Series this year, backhaul  capacity for the WiFi  system is being increased from 100 to 250 Mbit/s. 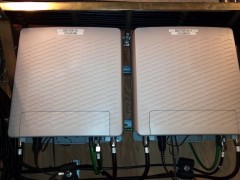 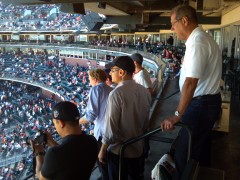 To serve the needs of AT&T Wireless customers, the Park also has it’s own dedicated 3G and LTE cellular system consisting of 116 antennas driven by a small room full of transmitters in the basement of the stadium. In a graphic  demonstration of Moore’s law at work, the new LTE transmitters (above, left) are surprising small, about the size of a desktop PC while the 3G ones (below, left) are nearly refrigerator sized. 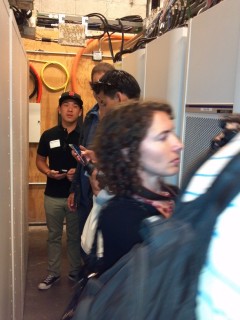 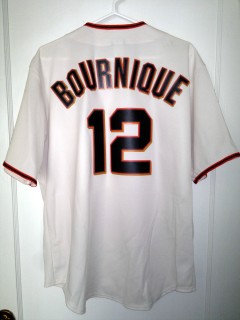 During the tour, Bill and Clift challenged us to a game of “find the access points and cellular antennas”. While a few were easy to spot, we missed most of them which are hidden away in the rafters above both decks of the park, under the outfield bleachers and behind signs and above false ceilings in the stadiums many walkways, concession areas and bars.

Schlough called the combined 4G and WiFi network at AT&T Park the best of any large venue in the world. He credited the park’s network with playing a major role in getting three Giants onto the roster for this year’s MLB All Star Game, where some of the players are chosen by fan voting. During the voting period the stadium PA and electronic scoreboards frequently encouraged fans to vote online for their favorite players, something that wouldn’t have worked in ballparks with lesser connectivity.

My own experience with the AT&T WiFi network at the ball park was impressive. I have an app on my Android phone that automatically connects and logs in to known public access points. As I crossed the street in front of the Park the app notified me that I was connected. I stayed connected the entire five hours I was at the stadium for the tour and game. I used the WiFi for email, Twitter and moderating and replying to comments on my blogs. Unlike the WiFi systems at most large venues, this one was fast and stable. Well done, AT&T.

Full disclosure; in addition to the limo, game admission, food and drink, AT&T also gave me an awesome Giants jersey with my name on the back and a set of Jawbone Jambox Bluetooth speakers.