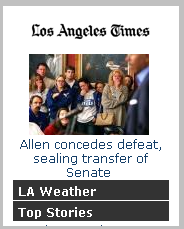 Local newspapers are struggling, print circulation is dropping as more people turn to the web for news. Traditional newspapers are looking for ways to survive. Many are turning to the mobile web as an additional publishing platform. This makes sense as a sizable percentage of commuters read the paper on the train or bus. On my own commute, everyone’s face used to be buried in the San Francisco Chronicle, Oakland Tribune or San Jose Mercury News. Now about a third of my fellow travelers are doing something with their phones. A few are making phone calls but more are staring at the screen and pressing a key occasionally. While some may be checking email or playing games, I think at least a few are  reading news on the mobile web. A mobile edition gives newspapers a way to at least partially hold on to their readership. Advertising on the mobile site might even replace some of the print ad revenue lost due to declining circulation.
And more and more papers do have mobile sites. I’ve found 33 US local papers and linked to them from the News/US Local by State pages at Yeswap.com. There are several more in Yeswap’s News/ International section.

Crisp Mobile’s mLogic platform seems to be very popular with newspapers looking to mobilize their content. No less than 13 of the 33 US papers on the portal are using mLogic. The sites are very similar in design and layout suggesting a common template. There is nothing wrong with that especially when the template is a good one – which this one is. Typically, the sites include about 60 full-length news articles from the paper’s print edition arranged into a half dozen sections. Navigation is good and enhanced by the use of accesskeys. Small images, one per page add interest on most of these sites. Page size including images averages around 10 KB which is small enough to work with virtually any WAP2 phone. A standard feature of the template is an “email this story” form.

This week I added 3 US local newspaper sites to the portal. As far as I know these papers are new to mobile publishing:

Several papers with existing mobile sites have recently switched to the mLogic platorm. Most had mobile pages designed years ago when side-loading to non-connected PDA’s was the most popular way to get web content on a mobile device. A site designed for a PDA’s large touchscreen and dedicated page up and down keys doesn’t work particularly well on a typical phone. In almost every case, the new mobile sites are easier to navigate, and contain more content than the ones they replace. The papers with recently redesigned mobile sites are:

I’m particularly glad to see that the Washington Post finally has a decent mobile site. It’s widely regarded as one of the two best US newspapers, the other being the New York Times. For years the Post, like the Times, had one of the worst mobile news sites. I reviewed it almost a year ago along several other newspaper sites and gave it the lowest rating possible as most of the links were broken and what stories did exist were little more than headlines. The new site still has a fairly limited amount of content compared with some of the others but everything works and it does feature dozens of articles from the award winning paper.

I’m sure there are more newspapers with mobile editions. I’d like to add as many as I can to the Wap Review directory (everything in the directory also appears in the Yeswap portal). If you know of a paper that isn’t listed in the News section of the directory, has an English language edition and doesn’t charge a fee to read, please let me know with a comment or use the contact form.

One thought on “Read your Local Paper on your Phone”