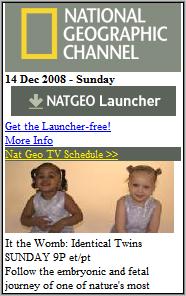 The mobile site’s homepage is currently dominated by promotions of a couple of upcoming National Geographic TV specials; one on identical twins and the other on the connection between Kung Fu and the Shaolin Temple.  The Channel’s detailed TV schedule is a click away and there are 15 short articles under the banner “Behind the scenes at the National Graphic”. These cover topics ranging from an interview with former president George Bush about his game fishing exploits to an ex-con’s struggle to survive “outside”.  There’s a poll too, today’s question is; “Do you think your genes control your sexual orientation?”.  The site also has a SMS trivial game based on the show “Dangerous Encounters” which follows a fearless herpetologist around the world in his quest to capture and study all the world’s crocodile species.

I found the National Geographic Channel’s mobile site surprising light on content.  The TV schedule is useful but not as useful as ones that show all channels like wireless.tvguide.com.  The  “Behind the scenes…” stories are short and tend toward the superficial. I expected better based on the quality of writing in the magazine and the Society’s TV programs.  I don’t understand why publishers dumb down their mobile sites like this. Content is king on the mobile web too. The news and information sites on the mobile web that get the most traffic like m.cnn.com and espn.mobi feature a hundred or more long-format articles.  National Geographic has plenty of great content, why aren’t they putting it on the mobile web?

Usability of ngc.mobi is reasonably good except on phones with limited memory which won’t be able to load the site’s 50 KB home page.  The “Behind the scenes…” stories are text only and aggressively paginated and only average about 7 KB. The pagination requires you to click “More” several times to read the whole story, which is annoying. It’s  also unnecessary as any browser that can load the homepage to reach the articles could also load any of the stories as a single page. Source: Mobility.mobi