Since the early days of wml-only WAP, Wikipedia’s content has been available in mobile format through a variety of third party sites.   Wikipedia’s “Mobile Access” page lists nine that are currently active plus Wikipedia’s own official mobile site at mobile.wikipedia.org. The official site was launched in June 2007 but is new to me.

I’ve been using  Wapedia.mobi since shortly after it launched in 2004. I really like Wapedia.  It’s fast, always up and does an outstanding job of adapting Wikipedia content to everything from five year old  wml-only handsets to an N95 or Opera Mini.  I was interested in seeing how Wikipedia’s own site compares with Wapedia’s.

Both have a simple homepage dominated by a search box, not unlike what you see when you visit Wikipedia on a PC.  Wikipedia Mobile gets points though for including the classic Wikipedia “puzzle globe” Iogo on the front page. 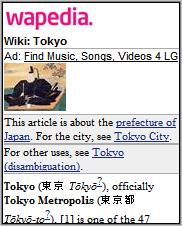 For a real test, I tried looking up “Tokyo” on both sites.  The Wikipedia Tokyo page is big (814 KB) with many images and some double byte Japanese characters.  It’s a tough test for mobile front ends.

Both sites were able to display the Wikipedia Tokyo page on a variety of mobile devices.  Pages were split and images resized so that everything fit both into the physical screen dimensions and the memory limits of all my test handsets.  The double byte characters were passed though unaltered. They look like gobbledygook on most western handsets but display correctly on phones with Japanese language support.

Overall I preferred Wapedia’s presentation (2nd image).  Some of the original page’s content was missing in Wikipedia Mobile.  Particularly noticeable was that the first few words of the article were missing so that the piece started with a comma! (3rd image)  A table near the top of the page listing Tokyo’s population, area, symbol, flower and other basic facts did not appear in the Wikipedia Mobile version of the page either. 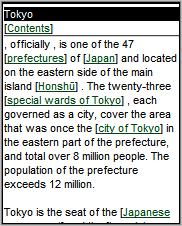 Another thing I liked about Wapedia is that it has a more fine-grained algorithm for splitting pages and resizing images.  Wikipedia resizes all images to a maximum of 128 px regardless of the phone’s actual screen size, Wapedia sets maximum image width to anywhere from 91px wide for the Nokia 6230 to 310 px wide for the iPhone or G1. Unless you like squinting at tiny pictures, I think you will prefer Wapedia’s approach.  The same is true of pagination, Wikipedia Mobile uses two fixed page sizes, the Tokyo page is split into either 30 pages for WML-phones or 18 pages for modern devices.  Wapedia dynamically adjusts page size to fit handset memory. The N95 sees the Tokyo article in 9 pages while an old wml-only Motorola i85 gets 60 much smaller pages. Not only is Wapedia more likely to work on low memory phones but it’s a lot faster and less annoying to press “Next…” nine times than 18 on a more capable phone.

One advantage of Wikipedia Mobile is that it’s ad free, Wapedia has advertising, although it’s pretty minimalistic, just a single text link at the top of each page.  I hardly notice the ads, but if the thought of advertising on Wikipedia content bothers you, try Wikipedia Mobile.

Personally I plan on continuing to use Wapedia.  But it’s good to have alternative ways  to get at Wikipedia’s great content from handheld devices. Source: Micro Persuasion

2 thoughts on “The Official Wikipedia Mobile”