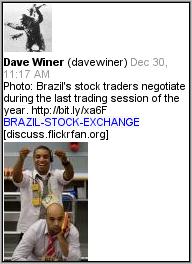 Micro-blogging service, Twitter is one of the big successes of Web 2.0  in terms of mine share and number of users, if not profits.  The simple open social network, where content is limited to 140 character status messages,  now has over five million users.  The 140 character limit comes from Twitter’s origins as an SMS service, but Twitter’s elimination of SMS updates in most of the world doesn’t seem to have slowed Twitter down. Most Twitter people (Tweeps?)  seem to be using web and mobile web clients to update Twitter and to follow their friend’s updates.

Twitter and the mobile web seem to be made for each.  Tweeps tend to update frequently,  stream of conscious style, whenever they have a thought to share.   The sparse format combined with a good mobile web client means that even the most basic web enabled phones make competent Twitter terminals.

There are a lot of mobile web based Twitter clients. I’ve covered Twitstat, Slandr, Twapper and Twitter’s own client previously. Yesterday James from mjelly told me (on Twitter)  about  another one that he likes, Dabr (dabr.co.uk).

After trying Dabr it’s now my favorite mobile web client Twitter client too, but it’s not my favorite Twitter web client on mobile.  How can that be?  I’ve started using a new full-web client called  Tweetree on my phone.  Although it’s not a mobile web site, Tweetree works as well as one in Opera Mini.  Plus it adds some really neat features to Twitter.  For one, it has threading;  Tweetree tries to link Tweets and @Replies into conversations.  The threading is hit and miss, sometimes it works but other times it seems to thread unrelated Tweets.  I can do without Tweetrees’s threading but it has another feature that is fantastic.  If a Tweet contains a link to an image, Tweetree displays the image below the Tweet.  Plus it expands those opaque compressed URLs from tinyurl and similar services into the real target URL and shows the linked page’s title too.  Tweetree is new and is still missing a few features,  notably the ability to follow new Tweeps, but the way it handles images and links is totally new and very useful.  The top image shows how Tweetree expans a bit.ly short URL into the full URL and Page Title and pulls in the linked image. I really hope Tweetree does a mobile client, too. 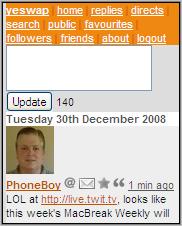 Anyway, back to Dabr.  It’s a full featured, “mid-sized” client similar to Twitstst and Slandr with avatar images and  quick access icons for replies, direct messages, retweets and favoriting.  It also lets you follow new Tweeps and has a full-text  Twitter search to help you find new people to follow.  But the best thing about Dabr for me is that, unlike Twitstat and Slandr, it works in Opera Mini without the need for horizontal scrolling.

While I was trying Dabr, I found a link on the site’s “About” page to yet another mobile web Twitter client called Tweete ( m.tweete.net). Tweete is a light weight (14KB) client that should work well on old  or low end phones and/or slow networks.  In spite of it’s low page weight, Tweete manages to include a lot of features; quick action icons for direct messaging, replies, “favoriting” and “un-favoriting”.  Tweete also lets you add new Tweeps to the one’s you are following and offers the fairly unusual feature of being able to delete one of your own Tweets.

With all these Twitter mobile clients, which one is best for you? Tough choice, I’ve put together a  feature matrix below to help you decide:

So which Twitter mobile client is best?  It really depends on your needs, preferences and the phone you are using.  Tweetee has the most features and one of the smallest pages sizes making it a good choice overall, especially on basic phones and if network performance is an issue. But Tweetee doesn’t display avatars in the main timeline.   I think Avatars add a lot to the Twitter experience, I like to  “see” who’s talking.  Dabr has avatars and all the features of Tweete except the ability to delete a Tweet, something I rarely do, so it’s my current favotite among the mobile clients. Be sure and check out Tweetree in Opera Mini or on your PC too.