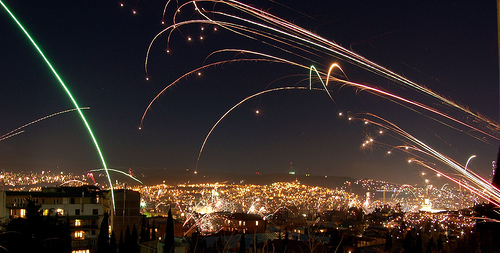 In spite of  so-so results with my 2008 predictions, I’m back to try again.

2009 will be a year of significant changes in the mobile world. The current global recession will have a profound negative effect on all industries. Fortunately, mobile will be affected less than most. Users may cut back on mobile spending but they won’t give up their phones and startups will continue to innovate in the mobile space. Here are some of the bright and not so bright spots I see for the coming year

1. At least a half a dozen new Android phones will be released in 2009 and the total installed base of Android OS phones will exceed five million by year end. Low cost, relatively open Android handsets will drive increased consumer interest in mobile web services and applications.  Normal mobile users will become increasingly unhappy with traditional carrier-centric mobile application security models and demand that carriers live up to their “open” rhetoric.  By year end, Android will be seen as one of  the major smartphone platforms along with Apple, S60 and BlackBerry.  Palm and Windows Mobile will be relegated to the role of niche players.

2. The first phones with an open-source Symbian OS will ship near the end of 2009 and be well received.  As with Android,  some of the new phones will come from relatively unknown Chinese OEMs.  Although losing a little market share to Android and Apple, S60 will still be the top selling smartphone OS in 2009 by a wide margin.  In the long-term, open-sourcing will increase the diversity of the platform and lock in its position as a market leader.

3. One or more Chinese companies will make a big splash in the global mobile hardware business under their own brands. The world’s most populous country is also the biggest and second fastest growing mobile market. Chinese firms already make most of the world’s phones already under contract to Nokia, Motorola, Samsung etc. 2009 will mark the year that consumers around the world see companies like ZTE, Huawei and Lenovo as recognizable mobile brands.

4. A least one very big name in the mobile world will go out of business or be absorbed in a fire sale acquisition. Possible candidates include Sprint, Motorola and Palm.

5. Mobile advertising spend will increase modestly but not enough to keep up with the increase in mobile web inventory and traffic – leading to lower fill rates, decreased CPC and CPM rates and falling revenues for mobile web publishers.  Venture capital has already dried up and with ad-revenue declining, mobile startups will have to struggle to survive . Companies with lean efficient operations, good cash reserves and an actual revenue model will be OK but others with including some with good products but shaky finances will not.

6. Mobile web traffic will double again in 2009. The negative effects of the economy like subscribers moving to cheaper data plans or dropping data altogether will be offset by overall subscriber growth, better browsers and the increasing market share of smartphones.

7. The web on mobiles will continue to gain momentum in the developing word, especially in Africa and Asia. The trend which started in 2008 with quadruple digit growth rates in several African nations will continue and spread to more countries as more and more users discover the Internet for the first time on their phones.

8. Apple will release a lower end device with a contract price under $100, maybe not at MacWorld next week, but definitely in 2009. I’m thinking a basic touch screen phone (not OS X based), smaller than the iPhone  with a music player, great user experience  UI and a web browser but initially no installable applications.

9, There will be significant growth in the percentage of prepaid customers, especially in countries like the US where prepaid has not been popular. Economic conditions will drive consumers to look for ways to cut their mobile spending. For many prepaid will be the answer.  It should be a good year for operators who can deliver real value on both prepaid and contact plans.  Look for strong growth both by unlimited prepaid companies like Cricket and MetroPCS and the lower cost pay per minute prepaid providers like T-Mobile, Virgin, Boost and American Movil’s Tracfone and Net10 brands.

10. Opera will release a new version of Opera Mini that will feature tabbed browsing. The number of Mini users will double to 40 million. Opera Mini will become the dominant web browser in Africa and parts of Asia and wherever  PC’s are relatively scarce compared with mobile phones.

In summary, 2009 will be a year of economic challenge for mobile businesses.  In spite of the economy, mobile web and mobile data services adoption will rise. New lower cost smartphone platforms like Android and OSS S60 will increase smartphone market share once again.

Happy New Year to all  WapReview readers.  Here’s wishing that 2009 will be a happy, productive and rewarding year for you and your families and friends.