G-SNAP! is a new social network based around live updates from events. Users create “SnapCasts” which are channels dedicated to a particular a sporting event, concert, conference or  live news event. 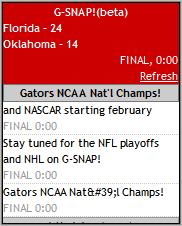 The person who created the SnapCast posts updates in the form of  text, photos and  videos.  SnapCasts are public, anyone can view a SnapCast and any registered G-SNAP! user can add comments to it.  SnapCasts remind me of Twittter hashtags but with multimedia  integration. They also have two features especially relevant to live event reporting, Snapshots and  the Clock.  The Snapshot is like a status message.  It appears at the top of the SnapCast and is intended to be used for important information like the current score of a game or the name of who is currently speaking at a conference.  The clock is a game clock, it can be started and stopped by the user who created the SnapCast.  Each SnapCast has it’s own short url. For  example, the Aviation Nation airshow SnapCast is at gsnap.com/318 and the NCAA national championship football game is  gsnap.com/391.

On the PC, G-SNAP! has an Ajax interface based around Yahoo’s YUI library.  It features separate scrolling lists for updates and comments with the static Snapshot and Clock  at the top. The mobile version of gSnap is a simpler “one size fits all phones” non scrolling design.  Mobile browsers are automatically redirected to it.  There doesn’t seem to be any way to view the mobile site on a PC or the PC site on a phone unfortunately.  SnapCasts on mobile are text only with links to images and videos.

The mobile G-SNAP! site lets you search for, view and comment on SnapCasts or create your own.  Text updates and comments can be entered in the browser but images and videos must be uploaded by email. 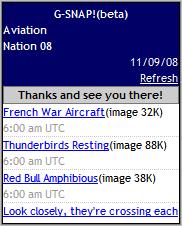 Updates and comments are aggressively paginated six to a page on G-SNAP! Mobile.  The pagination and lack of images keeps page size down to a mere 9 KB so G-SNAP! should work on even the most basic phones.  However,  users of more advanced devices will undoubtedly wish for in-line images and more updates and comments per page.  Given the small page size which seems optimized for basic phones and slow networks, I’m a little surprised that the image links in G-SNAP! Mobile go to 515 px wide images averaging 40 KB.  This is too large for many phones.  The desktop version of G-SNAP! uses 144 px wide in-line thumbnails.  If the mobile version linked to the smaller thumbnail images,with perhaps an option to “view full size image”,  it would be possible to view the images on almost all handsets. Videos are reformatted to 176×144 px and average around 400 KB.  The size and resolution is compatible with most video capable phones although G-SNAP! is using an obscure CDMA audio codec called QCLEP.  My N95-3 can play the SnapCast videos but not the audio portion.

It’s good to see that mobile support is a part of G-SNAP! from the start. I’d like to see G-SNAP! enhance the mobile side of the service with better image handling, variable pagination based on device capabilites and direct upload of images and videos using browse for file.

G-SNAP! is a fairly original concept and it seems to be getting some traction with about 400 SnapCasts posted so far including some mobile events like an interview with Google’s Rich Miner from around the time when the  G1 was launched and a couple of CES presentations. Source: George Drapeau’s Weblog