This is another in Wap Review’s ongoing series of tips on getting the most out Opera Mini, the full-web mobile browser that works on most phones. 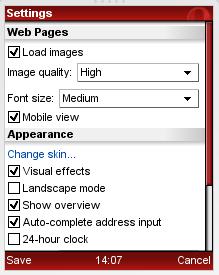 Opera mini is quite configurable. Using the build in “Settings” menu (top image) you can:

There is another undocumented  “Power Users” settings menu hidden in Opera Mini.  To access it enter the URL config: in Opera Mini’s address bar and select “OK” or “Go To”.  A screen similar to the one in the bottom image should appear.  Power User Settings include:

While most of the Power User settings are of limited use I’m really happy about the ability to increase the Loading Timeout and to turn off linklist folding.  Although I don’t use it (English is my only language) the ability to use server side bitmaps to display character sets that the phone doesn’t support is another great feature.  I’m glad the Power User Settings are there although I think Opera should make them easier to find.