You can’t help but notice those colored traffic overlays on Yahoo, Windows Live and Local TV Maps. I think it’s a great idea. Using data from sensors embedded in the pavement of highways in major metropolitan areas these sites show a road as green if traffic is moving at 50 mph or better, yellow for 25 to 50 mph and red for less than 25. Great for estimating when you have to leave for an appointment and for choosing the optimal route.

The same technology is also available on your phone’s browser where it’s potentially even more useful. But please don’t try to view mobile traffic maps while you are actually driving. Hopefully, you are car-pooling and someone other than the driver can handle the navigation chores. 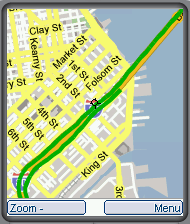 The nicest mobile traffic viewer is actually not a web site but Google’s downloadable Google Maps for Mobile which runs on most Java equipped phones or as a native app on Palm and Windows Mobile. The traffic option is available for over 30 US metro areas and works well on my Motorola i855. Not only can you see where the bottlenecks are but the maps can be zoomed to street level to find alternate routes. Microsoft has a very similar application called Windows Live Search for Mobile which runs on Windows Mobile and some Java handsets. The Microsoft effort looks nice but doesn’t work on my phone yet. You can read more about Live Search For Mobile at It’s All Mobile.

If you can’t install Google or Microsoft’s mobile applications there are also quite a few mobile web sites with real time traffic maps. One of these might help you avoid getting stuck in traffic. 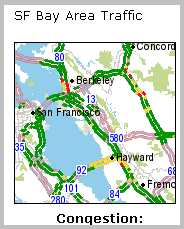 The Weather Channel’s mobile site (xhtml.weather.com) has traffic maps for most US metropolitan areas. A traffic link appears below the current weather conditions if there’s traffic information available for the area. The maps resize to between 100 and 300px wide to fit the screen width of the phone you are using. I think combining traffic and weather makes sense for mobile. Weather effects traffic and checking both before you go somewhere is a good idea. 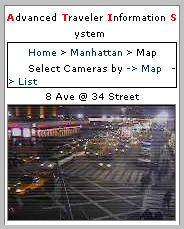 From the New York City Department of Transportation, we have ATIS Mobile: (service.nyctmc.org/mobile). This site provides not maps but real-time mobile access to 74 traffic cameras scattered around New York’s five boroughs. Images are 167px wide. You can tag the cameras on your route to have them display on a single book-markable page. 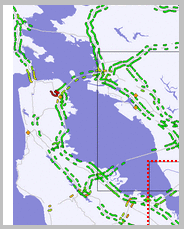 San Francisco Bay Area Traffic Maps: (map511.atspace.com) Real time traffic maps for the San Francisco area. There’s an overview map and detailed maps of the East and South Bay, but not for San Francisco, the Peninsula or Marin which have plenty of traffic too. The maps are “optimized for Palm Treo 650 and 700p mobile devices” so they are a big 306px wide and backed by an html image map so that touch screen users can tap on the overview map to open a detailed sector map. There are also text links to the sector maps so the site is usable on any phone that can display images that large. Opera Mini however gets confused by the image map and breaks the single image into three separate images arranged in a geographically illogical order.

Wiresoft has mobile traffic maps at www.wiresoft.net/traffic for Phoenix, San Diego, San Francisco, Denver, Chicago, Baltimore/Washington, Minneapolis, Portland, Salt Lake City, Seattle, Tacoma, WA and the Canadian border crossing at Blaine, WA. The maps are resized copies of standard web maps from various local agencies. There’s an overview map divided into anywhere from 3 to 12 numbered sectors. A set of numbered links takes you to a map of the corresponding sector. Most of the maps are 100px wide with the option of “big” 200px maps for several cities. It’s all pretty low-tech – wml, no tables or image maps – which has the advantage of working on almost any phone. The readability of the maps varies considerably but is mediocre at best, hardly surprising considering that they all come from different sources and are downsized from much bigger maps. 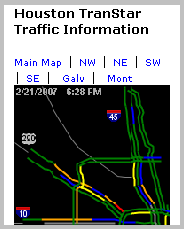 Houston’s Transtar (traffic.houstontranstar.org/mobile) has mobile traffic maps that are very readable. The map pages are served in wml or html based on browser detection but at 180-220px wide the maps are too large for many phones. The site also has traffic cameras, travel times and listings of highway construction and accidents.

Washington State DOT has a set of very readable Seattle area traffic maps at wsdot.wa.gov/traffic/seattle/small. Most are 126px wide with one being 256. This site shows that with good mobile specific graphic design it’s possible to create a complex map that’s highly readable even on the smallest of mobile screens. The site also has travel times and ferry schedules. 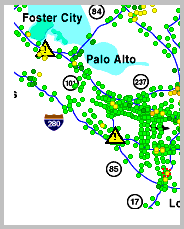 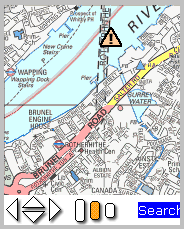 I haven’t found many non-US traffic sites, but Transport For London has a very nice one at trafficalerts.tfl.gov.uk/pda. As implied by the “pda” in the URL, this site is designed for high end devices with large touchscreens. The maps are 240px wide and an image map on the main page enables touchscreen navigation. You can also search for a street or road by name. The maps can be zoomed and panned making this one of the most full featuretraffic sites.

I’ve added all these traffic sites to the yeswap.com mobile portal in the Search/Traffic folder.

Via ResourceShelf.com.Related Items on the Wap Review Blog:

One thought on “Mobile Traffic Maps”