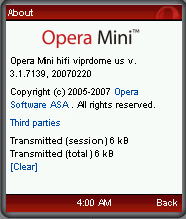 There’s a new version of Opera Mini out. The new release fixes quite a few bugs and adds support for the T-Mobile Dash and most of the Motorola iDEN handsets used on the Nextel network here in the US, Telus in Canada and a dozen or so small carriers around the world. Details on the Opera Mini Blog.

For most Opera Mini users this is a minor release, but not for me. My main phone is a Motorola i855 on Nextel’s Boost Mobile prepaid subsidiary. I’ve been using Opera Mini since I got the phone almost a year ago, but Opera’s never officially supported any iDEN phone. Since the release of Opera Mini 3.0 only the MIDP 1.0 “lofi” version of Opera Mini has worked on my phone. There’s nothing wrong with the lofi version, in fact it’s much, much better than the phone’s built in browser. But I’ve been salivating over the features of Mini’s MIDP2 edition, particularly the ability to assign bookmarks to a hot-key – which makes Opera Mini Bookmarlets ever so much handier.

I was not disappointed by Mini 3.1. After installing it with the iDEN JAL loader, I fired it up and found that in addition to the expected benefits of Mini hifi, like hot-key bookmarklets, content folding and full screen browsing there were two more surprises. The ugly and bogus “Java Memory is Extremely Low” message that has plagued the startup of every version of Mini on iDEN Motorolas was gone. And miraculously photo blogging works!

Before you get too excited, photo blogging, while it works, is a bit of a letdown. First the i855 like most Motorolas has a wretched camera, with this low-end camera phone’s VGA shooter being particularly bad. Secondly, after you shoot a picture, Mini has to do something it calls “generating a preview” that takes a couple of minutes! Until the preview is generated you can’t do anything with Mini although you can still use the phone’s calling and texting functions and built in browser. I suspect that this delay is not Opera’s fault but some very unoptimized image handling code in the phone’s Java Virtual Machine. But hey, I didn’t buy this phone for it’s camera which I never use anyway.

Using Opera Mini as a browser, on the other hand, is blindingly fast. iDEN is a slow network delivering throughput of 20kbps in rural areas and up to 80kps in WiDEN enabled major metros. With the phone browser I generally stick to sites with minimal graphics as loading images is frustratingly slow. With Mini, I find I seek out image rich sites like Engadget, ESPN, Flickr and the BBC because the pictures load and render quickly and look great.

There have been hints on the Opera Watch Blog that some sort of “special” downloading method or instructions for iDEN phones is coming. I’m hoping this means that Nextel has agreed to host Mini on their download portal like they do for Google’s gMail app. In the meantime, for fellow iDEN users – here are some direct links to the Mini 3.1 hifi .jad and .jar with the short filenames required by iDEN JAL.