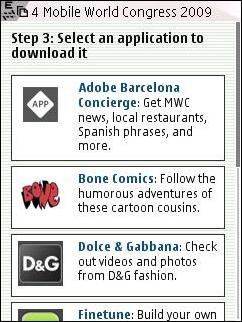 Adobe seems to have dropped their brain-dead practice of charging for the Flash client for mobile phones.  I never understood why the far more capable desktop client was free but Adobe expected end-users and OEMs to pay for the mobile client.  In my opinion, if the mobile client had been free from the start Flash would be the dominant mobile application platform today instead of Java ME.

At MWC, Adobe  launched  a new distributable player solution that finally brings the free distribution model to mobile. It lets developers package Flash Lite apps in such a way that when users launch them they are prompted if they want to install the player.  If the user agrees, the player will download and install at no cost to the user.  This mirrors the way Flash works in PC browsers and should help to drive adoption.

To showcase the distributable player solution, Adobe has created a mobile web site at m.adobe.com with a few free games and apps built with distributable player solution.  The distributable player supports most S60 3rd edition and recent Windows Mobile phones but is only available in India, Italy, Spain, UK, and U.S.  I can understand supporting only a limited number of handsets but why the geographical restriction?  I’d expect that the apps would work anywhere, why limit them to five countries?  The mobile site didn’t detect my location or my N95 and asked me to choose one of the supported countries and pick my handset from a list.  Given that the site can’t detect my location, it might actually be possible to download these games from other countries.  If you try it and works from somewhere other than  India, Italy, Spain, UK, and or the U.S. please leave a comment letting us know.

On my N95 in the US there were six apps available: 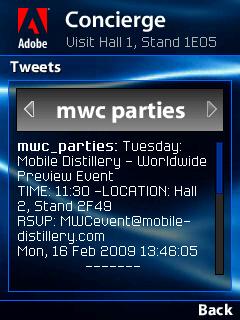 I tried TowerBloxx first and was prompted to install two additional apps; Adobe Version Checker and Flash Lite Player V. 3.01.  The installation (over WiFi) took a surprisingly long time. I didn’t time it but it seemed like a couple of minutes.  The player installed along side of  rather than replacing the N95’s pre-installed Flash Lite Player 3.0.  I wasn’t impressed by TowerBloxx, a rather simple game with uninspiring graphics that ran in a window half the size of the phone’s screen.  The MWC Concierge  was better. It offers show news, hours, a video player with interviews of industry executives,  a Twitter client with some hard coded show timelines,  a show map, Barcelona tourist guide and a small talking phrasebook.

Adobe also announced that it is develping a  full Flash 10 player for Android, Windows Mobile, Palm Pre and S60 platforms by early next year.  That should put some pressure on Apple!

Also announced as being  in development was a new  Adobe PDF and eBook reader that will (yawn) reflow content to fit mobile screens (like every other mobile book reader already does) and has DRM support.