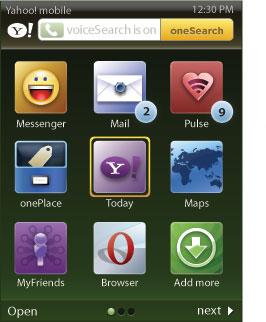 Wow, Yahoo announced a new mobile platform that looks very exciting indeed.  The new Yahoo Mobile will be a available as mobile web site and as an app for the iPhone,  Nokia S60, S40  BlackBerry and selected Samsung, Sony Ericsson and Motorola devices. The mobile web (linked image) and iPhone versions include the usual Yahoo Mobile  features like news, oneSearch, Yahoo IM and Calendar. But there’s a lot more including  direct access to social networks  Bebo, Dopplr, Facebook, Flickr, Friendster  Last.fm, MySpace, Twitter and YouTube and to Gmail, Hotmail and AOL Mail. Users will be able to customize the portal with personalized weather reports, stock quotes, sports scores and horoscopes and  add other content including RSS feeds and external links.

The Yahoo Mobile application (image left or above) will include all of the mobile web features plus  maps, widgets, voice enabled search and an integrated version of Opera Mini 4.2!

It sounds like a complete revamping of Yahoo’s mobile services with some very interesting and remarkably open features.

Yahoo Mobile will begin with a managed Beta of the mobile web and iPhone versions starting late next month.

The Beta of the app for other phones is scheduled for release in late May. All three Betas will initially be limited to users in the US, Canada, UK, France, Germany, India, Indonesia and the Philippines.

To sign up for the beta visit mobile.yahoo.com with one of the supported mobile browsers.