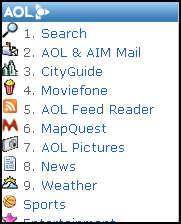 This piece concludes the AOL Mobile review I started last month. Part one covered AOL’s search features. To recap, I dissed the web search because it doesn’t search the mobile web. AOL’s local search has some nice features but doesn’t sort results by distance or rating. I also found it slow. Lately the speed seems much better, still not a rocket but at least competitive. Shopping search was promising with product specifications, reviews, photos and ratings. Prices were given but there was no way to make a purchase. In the last month the store names seem to have disappeared too. The listings now say things like “From $8.99 Found at 3 stores” I don’t get it. If I like price and I can’t buy it on the phone let me do something useful like email myself a link to the merchant’s site, or at least give me the merchant’s name so I can Google it! Overall, AOL’s mobile search was no match for the offerings from the Big Three (Google, Yahoo and MSN).

Of course, AOL Mobile (wap.aol.com) is much more than search, this is a big portal and it includes just about every feature offered on the Big Three’s portals. There’s News, Sports, Weather, Email, an RSS Feed Reader, Maps and Driving Directions, City Guides, Movie Search and listings, a personal Photo Album and social networking ala MySpace.

News, Sports, and Entertainment all seem to use the same display engine and are quite extensive in the quantity of timely items they present. News includes Politics, Health, Science and Business sections. Surprisingly, there are no stock quotes. Sports has general sports news plus sections for mainstream US professional sports. News stories are full length and from a variety of sources including the AP, USA Today and Reuters.

The RSS Reader looks like it uses the same rendering engine as News, etc. There are a few default feeds and you can add your own using a search feature that works well. The reader doesn’t track which items you’ve read though – you have to open each feed to see if there are any new items. Subscribed feeds seem to saved based on a cookie rather than requiring a logon which is convenient but has the disadvantage that your feeds aren’t shared across desktop and mobile and will be lost if you change phones or your phone loses its cookies.

Pages in the News, Sports, etc. and Feeds modules are split at 5KB of text by default. There is another 5KB of markup overhead most of which is a big inline style sheet which includes many styles that are not used. Almost all mobile browsers can handle 10KB so this is OK. Still I’d like to see the style sheet optimized to only include styles relevant to the current page. Images are not resized and, at up to 400 px wide, can overwhelm the built in browsers on many phones (see image bottom right). Fortunately, images can be turned off. There is no automatic adaptation for different browsers, but an options page (see image below left) lets you change the maximum page size, turn off images and toggle the transcoding of external links and toggle access keys on and off. 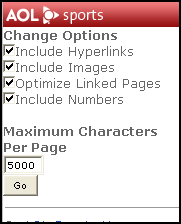 AOL Pictures on the web is a full featured online photo service with free unlimited storage and the ability to make albums public, private or shared. The mobile AOL Pictures is more limited in that it only allows viewing and editing one’s own albums. Editing is limited to deleting pictures and copying them from one of your albums to another. There doesn’t seem to be any way to upload camera phone photos to AOL Pictures.

AIM Pages is AOL’s year old “MySpace Killer”. Mobile AIM Pages let you see a subset of the modules available in the PC version including Pictures, About Me, Interests and Favorite Sites. A search box lets you find other user’s pages by screen name or interests. Unlike MySpace, AIM Pages are always public. You can exclude them from the AIM Pages search but anyone who knows your screen name or URL can view your AIM Page on the web or mobile.

AOL Mail is now free and comes with 2GB of storage and IMAP access which is a pretty good deal. There is mobile web access to AOL Mail which works well with a nice user interface that requires only 2 clicks to delete the current message and move to the next one thanks to both actions having access keys. Speed is not bad either, approximately 18 seconds for the delete/move next operation. Compared with results from last year’s Mobile Mail Speed Test, where I compared the Big Three’s mobile web mail products, AOL took the fewest clicks and was the second fastest (after gMail). But it looks like AOL is blocking access to mobile mail based on IP address. I can’t open it with an emulator from my PC or using Opera Mini on the phone. It works fine using the built-in Openwave V7 browser on my Boost Mobile i855. I really wish it would at least work in Opera Mini as I rarely use the slow Openwave browser with it’s clumsy UI. The IP block means I can’t do any screen shots of the mail app either. Another annoyance with AOL Mobile Mail is that it’s forcing me to login every time I use it even though I check the Save box when logging in.

Maps and Driving Directions are handled by the the mobile edition of Mapquest which is owned by AOL. I covered Mapquest in my driving directions comparison a year ago. I gave it a top rating then and that hasn’t changed – it’s still one of best mobile mapping and 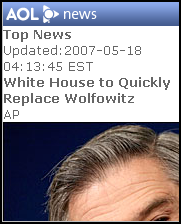 Movie Listings are from Moviefone, another AOL property. Moviefone Mobile very conveniently lists what’s showing and when at the theaters closest to your location – all on a single page that’s only one click off the front page. There’s a click to call link for each theater and a Mapquest map and driving directions are another click away. There’s a plot synopsis of each movie but no real reviews. Even without reviews Moviefone is probably the best mobile movie and theater search site on the mobile web.

AOL City Guide rounds out the portal. It’s a basic city guide which lists a good sampling of entertainment and dinning spots for each major US city. There are useful reviews for most places hidden under the “About Venue” link. Too bad the reviews readability is hampered by some unsightly markup gobbledygook that seems to be inserted at random in the text.

Coordination between modules is uneven. Mapquest is nicely integrated into local search, City Guide and Moviefone. Your current location is shared across Weather and City Guide. Access keys are consistent across modules. But Single Sign On, which should be the main advantage of using a portal instead of a bunch of independent sites, is missing – I had to log in separately to Mail, Pages and Pictures. I was also surprised that their was no link to the mobile web version of AIM instant messaging. While mobile web based instant messaging is cumbersome, AIM on PCs is AOL’s most popular service – I’d expect at least a link to the mobile web version.

To sum up, AOL Mobile is an uneven but useful portal. The best features are probably Mapquest and Moviefone. The News, Sports and Entertainment pages are good too – if your phone can handle the big images. AIM Pages Mobile is nicely implemented and is notable because, like MSN Spaces, every Pages user gets a mobile Page by default. Mail has great usability and decent speed but having to login every time plus the fact that it doesn’t work with Opera Mini are enough to discourage me from using it. I heard Arun Ranganathan, AOL’s system architect, speak at the Mobile 2.0 Event in San Francisco last fall and was impressed with his vision of where the mobile web is headed and his candor regarding it’s challenges. I think Arun, given adequate recourses, is capable of turning AOL Mobile Web into a mobile destination to rival any thing the big three has to offer.