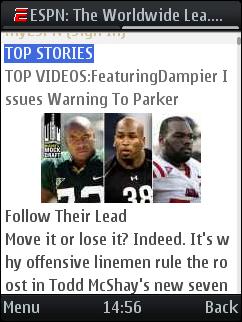 Guangzhou’s Ucfly is putting together a new release of their UCWEB browser.  It’s version 6.5 and a Beta for S60 and Java phones was released on Monday.  The resourceful crew on the UCWEB English forums have already translated all the menu’s and prompts to English for the Java and S60 2nd and 3rd Edition variants. You can read more about 6.5 and download the translated application from the following forum threads:

All of these downloads are unsigned. Which means that the S603rd version will not install unless you self sign it or have hacked your phone to allow installing unsigned native applications. The S60V2 and Java file should install and run on most supported phones although you will probably get some prompts to allow network connections, file system access, etc.

Both the Java translations come in two variants; one using the official 6.5 Chinese server and the other the 6.3 English server.  It looks like the S603rd one uses the English server and S602nd the Chinese one.  The disadvantages of using the official Chinese server are that the start page is in Chinese and because the server is in China behind the “Great Firewall” some popular sites including Vox and My Opera are blocked. With the English server no sites are blocked but you are using an unsupported configuration (6.3 server, 6.5 client).

I tried both server variants of  New88’s Java translation and didn’t see any differences in stability and feature set between them. I recommend using the English server unless you want to be a true Beta tester and report bugs back to UCWEB. There isn’t much point in reporting a bug on an unsupported configuration.

There is one rather large issue with all of the 6.5 translations.  They are sending an HTTP accept-language  header with “zh-cn” as its only value. This has the effect of telling web sites that Chinese is your preferred language.  Sites that support Chinese including Facebook, Google and My Opera will naturally send a Chinese page.  Unless your phone has a Chinese language pack you won’t even see Chinese though, just a bunch of little boxes in place of characters. In some cases it’s possible to go into the site’s options and switch to English. I was able to do this easily with Google and with a little more trouble with Facebook . On other sites it may be difficult or impossible to change the language.  I don’t remember language being a problem with the un-official translations of 6.3 so hopefully this can be fixed.

Unfortunately there doesn’t seem to very much new in 6.5.  The official release notes are here in Chinese with a Google translation here.  It’s pretty hard to follow the translation but 6.5 seems to be mainly a bug fix and optimization release.  A lot of the fixes address issues with touch screen devices.  The main new features seem to be: 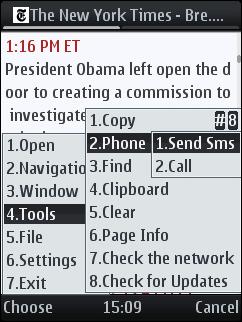 UCWEB is in many ways the best 3rd party mobile browser currently available.  It’s fast and stable and has all the great features that Opera Mini users have been requesting for years:

The only real problem with UCWEB is its rendering. Pages tend to look pretty bad.  The Java version wraps text in the middle of lines and displays transparent GIFs with extraneous borders. The S60 variants are the worst  with some of the ugliest Roman fonts I’ve ever seen. They are prone to overlapping text and images and missing or extra white space between words.  I’m not fussy about  typography  and aesthetic rendering but with UCWEB, especially in the native S60 application, its so bad it makes reading text painful.

I’m pretty sure that the browser renders Chinese pages very well.  UCfly seems to be focusing on the Chinese market and I suspect that they don’t have much interest in or resources to devote to fixing the rendering issues with western languages. I can’t really blame them, the Chinese market is huge and supporting multiple languages is expensive.  It’s a shame though as UCWEB has the potential to be the world’s best browser.