I read RSS feeds on my phone and on the web – a lot. I’ve never been 100% happy with any of the mobile web news readers. 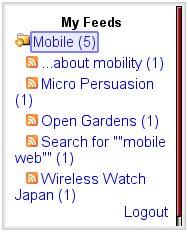 I’ve been been using Bloglines forever even though it has three “features” that I find really annoying.

I’ve tried Google Reader, Feedalot and NewsAlloy and all three keep links blue and rarely if ever forget what I’ve read. They do automatically mark items as read on load although that’s less of an issue with these readers because, unlike Bloglines, they only let you read one item at a time so you only lose one item not many.

So why do I stick with Bloglines. Simple, the combination of Opera Mini and Bloglines Mobile is so much faster than anything else. The other readers force you to load each item as a separate page. The drill is; load a list of items, pick an item and wait for it to load in a new page , read it, go back to the list and repeat the process for the next item – over and over again. Network latency and the overhead of loading all those pages make the process really slow. Bloglines loads all the items in a feed as a single page. You can even load all the unread items from all your feeds into one gigantic page. I do that before I get on the subway where there’s no mobile signal and read my feeds offline. Of course you need a browser that can handle big pages. 15-20 items run around 100 KB for the full feeds I read. Opera Mini can handle pages up to about 130 KB, if the page is bigger Mini has to split it up into multiple linked pages. Except that page splitting doesn’t actually work with Bloglines. By the time I’m ready to read the second page it’s no longer in the Opera server’s cache. Opera tries reload the page but now it’s an empty page because all the items are marked as read. 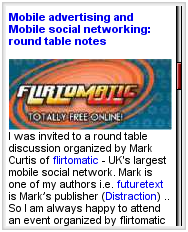 Recently I discovered Newsgator, from the makers of the commercial FeedDemon desktop reader. NewsGator is a free web based reader that also has a mobile version (m.newsgator.com). Unlike all the other readers I tried, NewsGator Mobile doesn’t mark items read until you click on a Mark as Read link at the bottom of the item detail screen. Like Bloglines, NewsGator lists all the posts from a feed in a single window. You can even organize feeds into folders and read all the items from all the feeds in a folder as a single big page – perfect for Opera Mini and off line reading. Links are blue and stand out from the rest of the text. It seemed like Newsgator would have the speed of Bloglines without it’s annoyances. The perfect mobile newsreader, I thought as I imported my 126 feeds from Bloglines and made the switch.

Initially I noticed only a couple of couple minor issues with NewsGator. I wanted to put all my feeds into one folder so I could read them as a single page. The desktop interface had Check All and Move to Folder buttons on the feed list but that didn’t work. I had to tag each feed manually before they would move. Another problem is that when items from multiple feeds are viewed together, NewsGator doesn’t show any sort of caption to tell you which feed each post is from. I can live with that, most of the blogs I read have enough of an individual style that I can usually tell who wrote what.

I was a happy camper. No more Bloglines. I started to write a post titled “NewsGator Mobile is My New Favorite Mobile Reader”

Then I found the show stopping bug! I started to notice something weird. In the morning I’d load up all my unread items from all feeds, around 30 0r 40 items on average. I’d spend an hour on the train reading them and clicking though the nice blue links in the posts. When I was done reading I clicked the Mark All As Read link and went back to the feed list to see what new items had arrived in the last hour. The first time I tried that there were no new items which seemed surprising but possible. But it soon became obvious that the Mark as Read link was marking every item in every feed in the folder read – including ones that have arrived while I was reading and that I hadn’t even seen yet. Sorry, that’s unacceptable. I can’t live with a reader that causes me to miss posts. I filed a bug report on the NewsGator forum and headed back to Bloglines. I’m monitoring the forum in the hopes that the bug gets fixed as I really want to use NewsGator.

NewsGator also has a new iPhone specific version. IPhone users who visit either NewsGator.com or m.NewsGator.com should automatically be redirected to the iPhone edition. I really can’t tell you anything about the iPhone version as I don’t have an iPhone and I can’t seem to fool NewsGator by changing my browser’s User Agent to match the iPhone’s.

jkOnTheRun covered NewsGator on the iPhone including a screenshot. It looks like the iPhone version only shows a synopsis of each item and makes you click through to read the rest which seems like a step backward.

NewsGator is so close to being the perfect mobile RSS app, at least for me. It’s fast and the interface is very simple and easy – it does everything I need. There aren’t a lot of features, there’s no way to save or email an item for example, but I never use those features in Bloglines. An Opera Mini send to del.icio.us bookmarklet takes care of my archiving needs. I’m really hoping the mark as read bug gets fixed but as it stands NewsGator is only usable if you read one feed at a time and the feeds you read don’t update often.

6 thoughts on “NewsGator Mobile – So Close, Yet So Far”