Found on the Mobile Web is an occasional Wap Review feature listing newly added and updated sites on the yeswap.com mobile portal and WapReview mobile site directory. With these latest additions and directory and portal now lists 932 mobile sites. 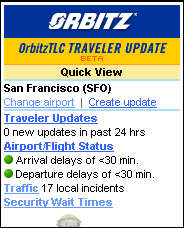 Orbitz (mobile.orbitz.com) A significant upgrade to Orbitz’ mobile site is the addition of OrbitzTLC Traveler Update which includes official reports of conditions like flight delays, security wait times and traffic accidents at US airports along with real time reports from individual travelers. The idea is that travelers can post a running commentary of flight delays, check-in line length, etc. for the benefit of their fellow travelers. It sounds kind of like “The Wall” that used to be a feature of old time BBS’s or maybe more like a Twitter stream. Anonymous posts are allowed. Registered users can vote on the the helpfulness of their fellow travelers. Interesting idea but a check of a dozen airports showed no comments in the last 24 hours at any of them.

New York Times River (nytimesriver.com) Dave Winer re-launched his NY Times River a while ago. It’s a a site that combines multiple NY Times RSS feeds into a single constantly updated page. Dave calls this concept “a river of news” because new items appear at the top and flow downstream until they disappear off the bottom. The Times feeds are partial ones so you have to click through to read the full article. The Times throws up an advertising page that you also have to click through to get to the real content. The River’s front page averages 90 KB but the articles can be several hundred KB in size. Dave says the River works well on a Blackberry. I find Opera Mini does a nice job with it too but the built in browser of a typical feature phone will have problems with such large pages.

BBC River (bbcriver.com) This is the same concept as the NY Times River but for the BBC. Great site for Opera Mini or smartphones on a 3G network. There are no ad landing pages on the BBC making this river a more seamless experience.

The Mobile Gadgeteer (blogs.zdnet.com/mobile-gadgeteer/wp-mobile.php) is a great blog (and recent Carnival of the Mobilists host) covering the latest in mobile phone hardware and industry news. The mobile edition is provided by Alex King’s WordPress Mobile Edition plugin which is an extremely easy way to mobilize any self-hosted WordPress site.

SymbianFreeware.mobi (symbianfreeware.mobi) In the last FOTMW, I covered PalmFreeware.mob and SmartphoneFreeware.mobi and wondered if there would be a SymbianFreeware.mobi. That question has been answered, the Symbian edition has landed with over 1220 freeware software downloads for the various flavors of this, the most popular of smartphone platforms. Unlike Palm and Windows Mobile where backward compatibility is the rule, Symbian is fragmented into at least four different, non-binary compatible versions. This site would be more useful if you could filter on say only UIQ3 software. You can kind of do that by using the search function and including the platform name in the query but an explicit filter would still be nice. 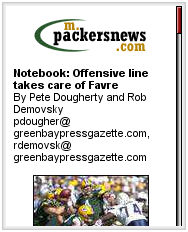 Packersnews (m.packersnews.com) The Green Bay Packers are the winningest team in NFL history with 12 championships. They are also the only non-profit, community-owned professional sports franchise in the USA. The Packers have a huge fan base that extends far beyond the borders of Green Bay, a small city (pop 100,000) in northern Wisconsin. The Green Bay Press Gazette, a local daily paper, hosts Packersnews.com, the ultimate Packer’ fan site. Starting with this season there is also a mobile edition of Packersnews with a selection of top stories and photos from the PC website. There’s a lot of Packer lore on the site but as a mobile site it’s rather uneven. About half the content is formatted for phones but many links lead to pages on the full site that are too large to load on most phones.

Mobiseer (http://www.mobiseer.mobi) Another mobile social bookmarking site. The focus of this one seems to be using your PC to set up the links on your Mobiseer mobile page. The Mobiseer mobile site is lacking in features compared with the PC one. Other than viewing your own bookmarks there are a couple of pages labeled Popular Sites and Featured Sites each of which lists only five sites. You can search by tag or keyword to find more sites. What’s missing is that there’s no way to browse, rank or comment on links from within the mobile site. No way to bookmark a site from the phone, either. An Opera Mini Bookmarklet would be nice but none is provided and I wasn’t able to create one that works with the Mobiseer submission page which is a non mobile one in any case. Via: Blognation

mjelly (m.mjelly.com) is another new site with many free mp3 ringtones. The site focuses on non-commercial music clips in genres like drum and bass, rave and metal. Anyone can download, registered users can rate tracks, Digg style, and eventually will be able to upload their own tones. 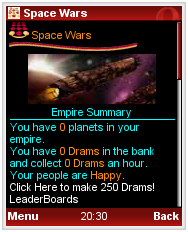 Cellufun (wap.cellufun.com) Is a popular (over 4 million users) mobile community built around ad supported Java and wap games. Many of the games are multi-player including the latest, Space Wars a massively multiplayer mobile web game (MMMG) for up to 120 other players. Besides the downloadable and online games the site also has community features like chat and polls and a selection of comics. Via: GamesOnDeck

Ta with You ( tauyou.com/mobile/mt.php) Translate text between 14 different languages. This site is easy to use and supports lots of languages. Translation quality seems decent, no worse than Google’s anyway. The only thing I don’t like about this site is that they ask you to enter your email address every time you use the site. Not only are email addresses a pain to type on a phone but there’s no explanation why this site is collecting them. They don’t email the translation or seem to use the address for anything else. Why are they collecting emails? The site seems legitimate but I recommend you use a clearly bogus email like [email protected]  Update: Ta with you is no longer asking for your email address. I can now recommend this site without qualification as the best online mobile translation site.