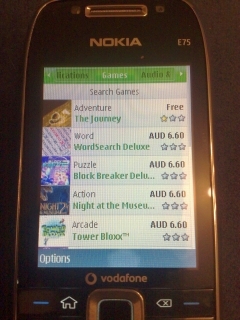 Reports are starting to appear on the web of users seeing the new Ovi app, themes and ringtones store on their phones. So far it’s been sighted in Australia, Ireland and Singapore.

Early reports  indicate that there is only a small selection of apps available so far.  Nokia promises that the store will  have over 2000 items when it fully launches. The launch was confirmed on Nokia’s Conversations blog in a story that was later pulled but is still visible in the site’s feed on Google Reader. Nokia long ago projected a May launch for the store so it looks like they are on target.

To see if it’s available in your market for your phone, open the Nokia Download app, refresh  and look for a folder named “Nokia Extras” or “Promo“. Open that folder and you just might see an “Ovi Store” icon.  So far it’s not showing up yet on my N95-3 in the US. According to an  All About Symbian item the store is a separate WRT widget download on the N75 and 5800 and a mobile website on older S60 and all S40 devices.

Let us know in a comment if the Ovi Store is showing up on your phone.

Image: All About Symbian