There’s one handheld device electronic device that I use quite a bit that’s not a mobile phone, it’s a circa 2003 Sharp Zaurus C860 (image below).  This Japanese market-only device was sold as a PDA but is in fact a mini-notebook.  It runs a Linux kernel with a QT user interface. Easily converted  to English it’s also a hacker’s dream with wide open hardware and software. I use mine for mobile blogging at events and while traveling.

The Zaurus has the best keyboard I’ve found on a pocketable device.  There isn’t a huge amount of software available for it but for serious blogging all I really only need a good text editor, a spell checker and a program that can resize images, all of which are available.

The Zaurus shows its age though  in the connectivity and web departments.  It can transfer files with a PC using a USB cable or with a phone using IR. Adding a WiFi Compact Flash card lets it connect to the web.  Bluetooth is supposed to be possible with a different CF card and some added software, though I haven’t tried that yet. There are several web browsers and  email, FTP, IM and SSH clients. The battery lasts for about four hours of  normal text entry, but using WiFi will kill it in under an hour. And I have to disable the browser’s JavaScript to keep it from hanging or crashing on many sites, including this blog.

I really like the Zaurus’ portability, unlike the smallest netbook, at 4.25″ x 3.25″ x 1.0″ and 8 ounces it will easily fit in a coat pocket. I can even squeeze it into the front or back pocket of my jeans if needed.  The five row keyboard has well spaced keys that have very good feedback.  The Zaurus is also much more stable than any smartphone I’ve ever used.  It doesn’t crash and I’ve never lost a single word that I’ve typed.

I’m always on the lookout for something like the Zaurus but with a modern browser, built in WiFi and  Bluetooth and better battery life. It doesn’t seem to be happening though. The iPod Touch and various Archos tablets have better browsers and connectivity but lack a real keyboard .  The N810 comes close but it’s keyboard isn’t nearly as good.  Still, if the Zaurus died tomorrow, I’d replace it with an N810. I’ve been hopeing the N810’s replacement would have a better keyboard.

I was also looking forward to the deluge of MIDs (Mobile Internet Devices) that was predicted a year ago but which doesn’t seem to have happened.  I guess the market for pocketable devices optimized for text entry and general purpose computing is pretty limited. 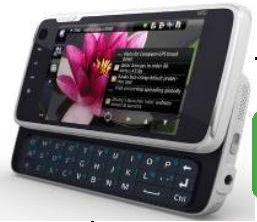 MobileCrunch this morning leaked details of the next Nokia tablet, the N900. It will supposedly be much smaller than the current N810 with a smaller screen. And it  will be a phone with both GSM/GPRS and HSDPA 3G radios/ and voice calling capbilities over both the GSM mobile network and VOIP over WiFi or 3G.  The N900 will come with Firefox 3 and a 5 MP camera.  The MobileCrunch story doesn’t mention Bluetooth but I can’t believe that Nokia would leave that out of a high end phone. The CellPassion also has a story on the N900, which includes an image (above).

Make no mistake, the N900, at least  as described by Engadget is a smartphone, not a tablet, not a MID. It’s almost the same size as the N97.  The three row keyboard wth the top row crammed up against the body of the phone doesn’t look like it will be anywhere near as usable as the Zaurus’ spacious five row affair either.

It’s nice to see Nokia making a Linux phone but I don’t think it’s going to be my Zaurus replacemen,t assuming it’s real. That keyboard is a deal breaker. I ‘m also hoping that the N900 doesn’t mean the end of the larger form factor Nokia tablet line.