I’ve been waiting for this to happen. I know most of you are probably tired of all the hype around mobile location based services (LBS). Location is not a panacea, it’s just another technology that can enhance a limited number of mobile services. As Russell Beattie said, “Most LBS applications are a black hole of wasted time, effort, money, and opportunity.” I generally agree, but as even Russ in one of his better rants admits, an area where location really does make a difference is mapping and directions. Would you rather have a local search application launch with a map centered on your current location or with an outline map of the US?

From a purely technical perspective, finding the user is as easy as it gets in terms of LBS technology. The government’s E911 mandate means the carriers already have this technology in place. However the business, privacy and political barriers to being able share this data on a mobile network is another story.

One of those barriers has fallen. For the first time a US carrier has given users the ability to share their location with a third party mobile web site. Granted, the third party is Microsoft, but it’s a start, completive pressures will eventually extend this capability to other sites and services. At least that’s what happened in Japan years ago. Initially DoCoMo only provided location data to selected on-portal sites but after a few years users were given the ability to grant permission to any site on a site by site basis.  It might take a while though, the US carriers are the worst in the world when it comes to using security as an excuse to block innovation.

What Sprint did is launch two new LBS services from Microsoft, both of which are free of charge to all customers on the Sprint CDMA network. A data plan is also required but Sprint’s are pretty reasonable $10-15/month for unlimited data from any handset. The first new service is a mobile web based local search engine that uses your current location as the starting point for searches. The other is a Java ME based local search with voice recognition – you speak your search query rather than laboriously pecking it in. 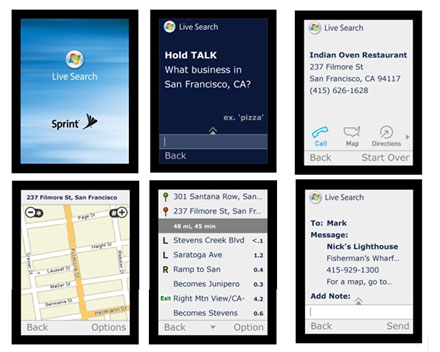 I had a chance to try both at a couple of the carrier’s stores last weekend. It’s nice to see that Sprint’s not hiding the new location enabled search, it’s integrated into the main search box at top of the portal’s home page. When you do a search, the results page has a “Go Local” button at the top which when pressed performs a location based search. It worked pretty well on the searches I tried. The service doesn’t indicate your precise location, only telling me I was somewhere in San Francisco, but it obviously knew my position more precisely, correctly returning the nearest ATM and Starbucks when tested from two different Sprint stores. The results pages are the familiar ones from Microsoft’s Live local search, with high quality zoomable, scrollable MapPoint maps, click-to-call and driving directions. Very nice, at least when it works – I got several time-outs and a “Sorry the search Service is not available” error in the brief time I was trying it. I hope Microsoft and Sprint can quickly fix this apparent scalability issue.

Another presumably temporary but really dumb part of this rollout is that according to comments on the Engadget post it doesn’t work on Windows Mobile devices. I confirmed this on an HTC Mogul at one of the Sprint stores. Even if I typed the same URL that the feature phones were loading, mobilesearch.sprintpcs.com, I didn’t get the location search. I don’t know about Treos and Blackberries as there were none at the stores with a working data connection. Pretty weird, Sprint and Microsoft roll out an awesome new service that works on cheap phones but not on the top of the line models running Microsoft’s own mobile OS!!

There’s some confusion about the technology behind this service. According to Engadget it’s based on cell location. However, Sprint’s press release repeatedly says “GPS” with no mention of using tower coordinates at all. My guess is that it’s both. Sprint is likely using the same technology that it implemented for E911 emergency services, assisted GPS plus AFLT (Advanced Forward Link Trilateration), meaning that the GPS receiver in the handset is augmented by computers on the network which have access to both satellite and tower location data.

I also tried the other new Sprint feature, the voice and location enabled Live Search Java application, on an LG Musiq. I only had a few minutes to try it (people were waiting to play with the Musiq which is apparently a very popular model) but I was quite impressed. I had to download the application but the link was right on the Sprint home page. It took less than a minute to download and launch on the EVDO network. The user interface couldn’t have been simpler, you just press the “Talk” button and speak you query. I tried with the classic test of “Starbucks”. The first time I got a weird message that said “Keep typing…” but with no text box to indicate what I was entering. That didn’t seem to be working so I canceled out and retried. After a typical GPS delay of about a minute Live Search had located the nearest latte shop. This application uses the TellMe technology Microsoft acquired last year and is currently available on only five phones; the Samsung a900 and a920, Motorola Razr, Sanyo 840 and LG 550 Muziq.

I believe in using location data where it adds real value like local search. According to the Engadget post, Microsoft has indicated that the Sprint deal is not an exclusive one. I expect to see other carriers launching similar services with Microsoft or maybe a different partner.