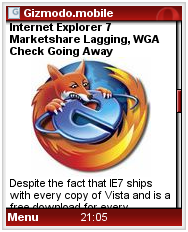 Gawker is a hugely popular New York City gossip blog. Based on it’s success, founder Nick Denton has built a blog network called Gawker Media which includes some of the net’s most destinations like Gizmodo, Lifehacker, Valleyway, Wonkette and Defamer. There are 14 Gawker Media sites in all (list from Wikipedia):

Over the past nine months, Gawker Media has created mobile versions of all the above sites except Nick’s blog. You can see the mobile version of any Gawker Media site by appending ?view=mobile to the end of the url. For example, gawker.com?view=mobile or valleywag.com?view=mobile. It’s nice to see that a big publisher like Gawker is thinking of mobile but these really aren’t very good mobile sites. I reviewed the Lifehacker mobile site when it launched 9 months ago. The main problem then and now is that these sites deliver both too much and too little content. Here’s what I mean:

I really like most of the Gawker Media sites, in fact I’m a big fan of Lifehacker and read ValleyWag, Wonkette and Gizmodo pretty regularly as well. It’s a shame the mobile sites are so bad. I really don’t understand what sort of mobile user Gawker Media is targeting. The sites won’t even load on popular mass market phones. On the other hand, Opera Mini and other full-web browsers handle the PC versions of these sites quite well, plus you can view and leave comments. Does anyone use these Gawker Media’s mobile sites and if so why?

The good news is there are some excellent alternate ways to read Gawker Media’s sites on almost any phone. 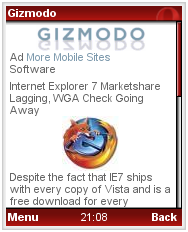 All these blogs have full feeds. So if you are a hard core Lifehacker or Wonkette fan, just subscribe to the feed in Google Reader Mobile or Bloglines Mobile. I especially like the combination of Bloglines Mobile and Opera Mini, as I can read the feeds quickly and easily in Bloglines and click though to the actual site to follow the comments. Be warned though, all these sites are updated multiple times a day so you will get a lot of traffic in you reader.

If you just want to sample these blogs occasionally on your phone you can use several services that create mobile pages from an RSS feed. My current favorite is FeedM8 (review) but Mowser or Winksite are a couple of other good choices. The screen shots compare Gizmodo’s own mobile site (top) with the FeedM8 version. As you can see they don’t look much different. The images are smaller on the FeedM8 version, but otherwise the content is the same. But what a difference in size, the front page of the Gawker Media mobile version is 287 K, while FeedM8’s Gizmodo front page is only 10 KB. FeedM8’s does it by not having images on the front page, so you have to click through to the items to see the pictures. Some of us pay as much as $10 per MB for mobile data or use slow GPRS, iDEN or Edge networks that can take minutes to load a 287 KB page. FeedM8 can be a significant time and money saver. The FeedM8 page is also easier to navigate with much less scrolling and numeric hot keys. While I don’t think much of Gawker Media’s mobile sites, I do have to thank them for providing mobile friendly full feeds.

3 thoughts on “Read Gawker, Lifehacker or Valleywag on Your Phone”