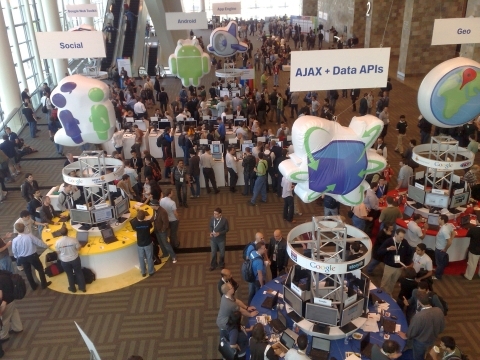 I’ve had a couple of days to absorb what I saw and learned at Google I/O.  Here’s my take on the conference, especially as it relates to mobile.

First, it was the best run technical event I’ve ever attended.  Not only were the sessions very well presented and useful for anyone working with or interested in Google services, APIs and products but the event logistics were beautifully done. Someone sweated the little details like the indoor attended bicycle parking, short check-in lines, strong WiFi throughout the site, great quality, quantity and variety of food and the fact that every session I attended started and ended on time.

This year’s I/O was much more focused on mobile than last years. The HTC Ion Android phone giveaway on the first day sparked a lot of interest in the platform. Many of the Android development sessions that followed were SRO.  Giving 4000 hard-core developers an open handset and following that up with two days of in-depth development tutorials should do a lot to spur Android application development.  The device itself gives a very favorable impression and should create some much needed buzz around Android.  In order to receive the phone attendees had to sign a statement acknowledging that the phone was a special edition intended for development and agreeing to only write about it in the context of developing and testing applications. I’ll do my best to abide by that agreement but I don’t think Google will mind me saying that ION is my new favorite handset and has replaced the N95 as my main phone. 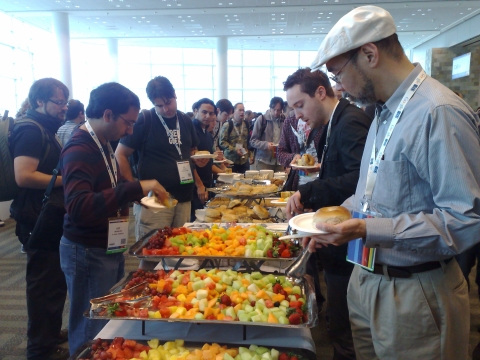 The big announcement this year was Google Wave. I haven’t received my invite to the Wave Beta yet so I haven’t been able to get any hands on time with it yet.  At the keynote Lars Rasmussen mentioned that all attendees would be getting invites Thursday or Friday.  I don’t know if there has been a delay or press attendees like me are excluded from the Beta.  If you want to learn more of the details of Wave, the best independent resource I’ve seen is Mashable’s  Google Wave: A Complete Guide.

The keynote presentation emphasized Wave as an improved tool for personal and business communication.  Integration with social networks including Orkut, Facebook and Twitter was also mentioned. There has been quite a bit of speculation on the web about Wave as a social network in its own right and as threat to both Twitter and Facebook. Wave incorporates elements of  Twitter (micro-blogging) and Facebook (activity streams). But there is a lot more happening in Wave that no social network does including real-time collaborative document creation. Wave is also more open than Facebook with the entire platform slated to be open sourced and Google promising interoperability between their Wave and other services based on the Wave source code but operated by third parties.

Google is making a big commitment to Wave with a large team,  I’ve heard as many as 80 engineers, working on the project in Australia. Google’s vision for Wave seems to be something much bigger than mere social networking. They are positioning it as a hugely disruptive innovation that will change the way we communicate, socialize and collaborate. It’s a big  gamble even for Google.  Will it succeed? I don’t know but I do know it will take time. The public Beta is months away and Google’s Betas typically last years.  Wave must first build a mass of users, something which will take a while.  As a service which stores users communications, documents and personal information in the cloud, Wave needs to have robust security and data integrity. Google can’t afford a loss of user data or a security breach, either of which would be devastating to the project’s adoption, even in the public Beta.  It is a big gamble, but if anyone can pull it off it’s Google. 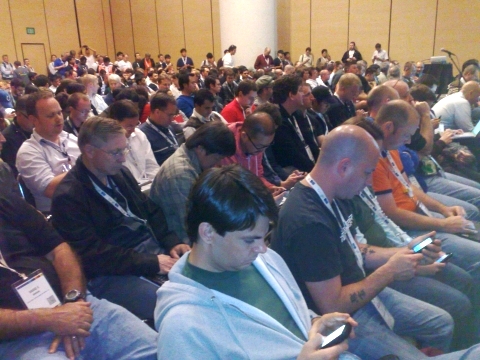 One of the sessions I attended was “Google Wave Client: Powered by GWT”  presented by Lars Rasmussen and Adam Schuck, who was the original  GWT techical lead and is now a member of the Wave team. If you aren’t familiar with GWT, which stands for “Google Web Toolkit”, it’s an open source framework that lets you write AJAX apps in Java.  GWT cross combiles your Java code to JavaScript and handles all the complexities of browser detection and adaptation to deliver optimized code for IE, Firefox, Chrome, Safari, and Opera.  What I didn’t know was that GWT also supports the Android and iPhone browsers.  According to Lars and Adam, the mobile version of  Wave is built with GWT from much of the same Java code as the desktop versions.  The new Gmail web client for the iPhone and Android was also created with GWT. At the first day’s keynote Vic Gundotra indicated that Google’s long term strategy is to move from  local applications to  browser based web applications on phones. GWT seems to be a major piece of that strategy. It also looks like something worth a look by web developers  building sites targeted at phones with browsers that have good JavaScript support like the iPhone, Android and possibly Opera Mobile.