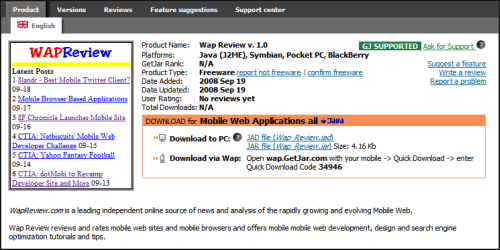 I met Bill Scott, GetJar.com‘s VP of sales and business development, at CTIA. Bill showed me a rather clever way to promote a mobile site called Visual Bookmarks.  They are tiny (about 4KB for the Java version) Java, Symbian, Windows Mobile or BlackBerry applications that do nothing but launch your site in the phone browser.

So what good is a Visual Bookmark?  What it gives you is another channel  for driving mobile traffic to your site. Visual Bookmarks also have a unique advantage over traditional ways of promoting a  site, they put your logo right in the phone’s menu.  Having your icon visible in the Java, Games or Applications folder of a user’s phone serves as a constant reminder of your brand.

On some phones, Visual Bookmarks are especially powerful. On Nokia S60, Blackberry and Palm OS devices, they live in the phone’s main menu right alongside built in applications like Contacts and Messaging. On Nokia S60 3rd edition phones a user can even assign a Visual Bookmark to the Active Standby toolbar  on the idle screen, probably the ultimate location in terms of visibility and accessibility.  Other phones, including Motorola’s iDEN models, support assigning a Java program such as a Visaul Bookmark to a shortcut key or to one of the two main soft keys.  For example on my Motorola i855, I have Opera Mini on the right soft key and have created a shortcut to launch the Gmail app by pressing  Menu + 1.

No programing ability is required to create a visual bookmark.  Just register for free as a GetJar developer, then click on Products, Add Product and choose “Mobile Web Application, WML/xHTML Site” from the platform dropdown. Fill in the rest of the web form with your site’s url, description, and screen shot, thumbnail and icon images.  It takes about 24 hours for GetJar to approve and create the Visual Bookmark application and add it to the catalog.

On course you have to get users to download your Visual Bookmark.  Traditionally this has been a problem  with many non-technical folks pretty much afraid to download anything to their phones. But GetJar has millions of loyal users who see the site as a trusted source for free mobile game and application downloads. Believe me, GetJar users will download your Visual bookmark it it interests them. GetJar helps with that by listing your site’s Visual Bookmark right in GetJar’s online App Store on both web and mobile web.  The listing shows a screenshot and description, both of which are supplied by you. Several big mobile publishers including MocoSpace, YouTube and eBuddy have already created Visual Bookmarks. Check out GetJar’s Visual Bookmark catalog here.

There is no charge for creating a Visual bookmark and listing it in the catalog.  GetJar also offers premium placement and promotion on the portal for a fee.

I just created a Visual Bookmark for WapReview.  It’s not approved yet but the screenshot above shows what it is supposed to look like in the catalog.  If all goes well, I’ll post tomorrow with a download link for it as well as my experiences using it on a variety of phones.

What is GetJar?  A self described “App Store for the 3 Billion Users Who Don’t Have an iPhone”, it’s the largest and one of the oldest (since 2004) off-portal download sites  for free java and native mobile games and applications.  Getjar’s catalog contains 20,000 plus titles and the site delivers over 13 million downloads a month worldwide.  And according to MocoNews, GetJar recently started working with carriers to provide the GetJar experience on-deck as well. Getjar has already signed up 10 carriers including 3 UK.

Visual Bookmarks don’t work on the iPhone, which can’t run Java programs, but there is an easy way to do something similar for it too.  Create an icon as a 57×57 PNG and save it in your site’s root as “apple-touch-icon.png“. When an iPhone user bookmarks your site with the “Save to Desktop option, the icon will appear in the phone’s main menu as a shortcut to your site.

7 thoughts on “Put Your Mobile Site On Phone Menus”