Found on the Mobile Web is an occasional WAP Review feature listing newly added and updated sites on the YesWAP.com mobile portal and WapReview mobile site directory. With these latest additions the directory and portal now list 1158 mobile sites. 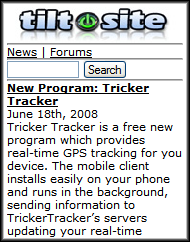 Do you have an ATT Tilt Windows Mobile Phone? Then you should know about TiltSite (tiltsite.com), a very active site dedicated to the Tilt. If the Tilt name doesn’t ring a bell, it’s the ATT branded version of HTC’s Kaiser, aka TyTN II – the latest in a long line of devices with a 2.8 inch QVGA screen and slide out QWERTY keyboard.

Tiltsite, which seems to be a spin off from mobilitysite.com, is a news blog featuring the latest tips ,tricks and hacks for getting the most out of your Tilt along with software and accessory reviews.

The mobile edition of Tiltsite uses the WP-PDA WordPress plug-in which creates a single column “middle web” site that’s bigger (about 45KB including images) than a mobile site but smaller than a full-web one. WP-PDA is a good fit for the Tilt’s Mobile Windows Explorer browser and the current breed of mobile full-web browsers from Opera and Netfront.

There is a Forums link on TiltSite’s mobile edition which leads to the full (not mobile) version of Mobilitysite’s HTC Kaiser/TyTN II/ AT&T Tilt message board.

Scientific American (wap.sciam.com) Now you can read articles from the venerable popular science magazine on your mobile phone. SciAm’s mobile site has several dozen complete articles from the magazine’s full web site. Articles are paginated and images are resized resulting in a highly usable site that works well with any mobile browser.

Wired Magazine (mobile.wired.com) This is a new official mobile version of Wired designed by Crisp Wireless. The site offers several dozen full text articles from Wired,com in a highly usable mobile format. The design is similar to other Crisp Wireless developed news sites. It’s a one size fits all design with images resized to 160px maximum width and aggressive pagination to keep page sizes down. I like the use of accesskeys to create numbered links that can be opened with a single click using the corresponding number key. 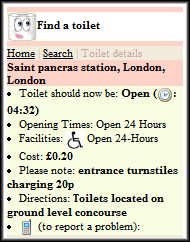 FindAToilet (findatoilet.mobi) Same concept as MizPee (review) but for the UK. It does what it says, you type a city or town name and get a list of public toilets. Listings include the hours of operation, cost and in many cases a detailed description of exactly where the loo is in a building or park. Nice idea but It doesn’t seem very comprehensive – only 40 public toilets in all of London?

Update: See the comment from Sue of Find A Toilet.  When searching the larger cities, you will get more results by specifying the borough, district or town within the city like “Camden” or “Ealing” rather than “London”.

Air New Zealand (http://airnz.mobi/) has a new mobile site with flight status, timetables, and listings of web-only specials and last minute deals. No booking or online check in though. To use the timetables you need to know the three letter code for both the arrival and departure airports with no way to look them up on the site!

Preg2Go ((preg2go.com) “Your mobile pregnancy nutrition info source”, Preg2Go has nutritional advice for pregnant women with discussions of “good” foods and “bad” ones along with general nutritional information. A generally usable site although the combination of light orange text on a white background can be hard to read on some phones.

iCPR ((icpr.mobi)) A single page site providing instructions on giving cardiopulmonary resuscitation to someone who has suffered a heart attack. The site covers the currently recommended “Hands Only” version of CPR. While a mobile website is no substitute for CPR training, it helps to make more people aware of this simple life saving technique. 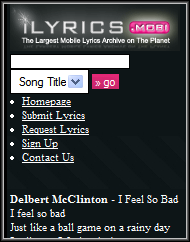 iLyrics ( ilyrics.mobi is a mobile song lyrics site. The database seems very complete, I was able to find lyrics for most of the obscure titles I tried. iLyrics is at least partially crowd sourced, with users encouraged to contribute lyrics. Searchable by title or artist.

City.Mobi has guides to hundreds of cites around the world. The site is offered in eight languages and covers Africa, Asia, Europe, the Americas and Oceania. Thats a lot of information although usability could be better.

The guides are essentially lists of hotels, restaurants, shops, entertainment venues and travel and transport providers. The listings consist of the address, a click to call phone number and, in the case of hotels, a star rating. Good nformation but it needs to be organized better. For example, for San Francisco City.mobi lists over 500 hotels, five to a page, 125 pages total. The listings are city wide and there is no way to sort them or search for a particular hotel or location. You can filter by star rating but that’s it.

Another usability problem is that there are numerous active links to unfinished parts of the site. An example is an “Events” link that leads to a “Coming Soon” page. This is classic garden pathing which wastes mobile user’s time and money. If there’s no content, the link should be removed or disabled.

One thought on “Found on the Mobile Web #42”