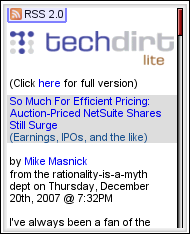 Techdirt is Mike Masnick’s blog covering technology and media. Mike’s a very good tech business analyst, particularly in the areas of privacy and intellectual property and he’s made Techdirt a hot property. It’s on CNET’s Blog 100 list, the Technorati 100 and lots of other “best of tech blogs” type lists. There’s a “Lite” version (techdirt.com/index_lite.php) that works on some mobile browsers.

Good blog, I’m not so sure about the Lite version though. It eliminates the ads and most images and has a simplified layout. But it’s not really that light. The front page contains the full text of the 20 latest articles- about 60 KB’s worth. Techdirt doesn’t call it a mobile version so I guess I shouldn’t complain and it is loadable on Blackerries, Smartphones , Opera Mini, many Nokia feature phones and recent devices using the Netfront or Obigo browsers. Just don’t expect to be able to load Techdirt Lite on a phone with a Motorola or Openwave browser.

The format of Techdirt Lite is actually rather cool, it’s the simplest possible UI, just open the site, start reading and read until you’ve had enough. But why not limit page size to the 10KB that all mobile browsers can handle. All Techdirt would have to do is paginate the site, 6 items to a page with a Next Page link at bottom of each page. I don’t think pagination would ruin the experience, having to click on Next every 9000 characters or so is no great hardship considering it would make the site usable on all mobile browsers instead of the 30/40% that can handle the 60KB version. A side benefit would be much faster page loads, a real issue on slow networks.

Update 21-Dec-2007: As you can see from his comment, Dennis Yang at Techdirt has modified Techdirt Lite, reducing the number of items per page, to bring the site under 10KB. I  just tried it on a phone that couldn’t even load the site yesterday, a Motorola i855, and the site loaded in 10 seconds flat. All the content is still there, just split into more pages. In case you think 10KB of text is a tiny page, the new Techdirt front page is 21 screenfulls on the i855. This simple change has at least doubled the number phones that can browse Techdirt Lite. Well done, Dennis.