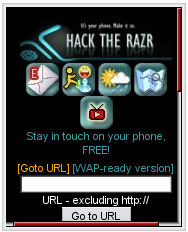 Motorola phones have plenty of detractors, but one great thing about them is that they are the most hackable of all mobiles. I’m talking about the good kind of hacking, figuring out the secrets of hardware and software and making it work better.

Unlike most phones which require special expensive hardware to update the firmware, with Motorolas all that’s needed is software and an ordinary data cable. There’s also free software available to extract, modify and replace almost any file in the phone’s filesystem. As a result of this relative openness, there’s a big Motorola hacking community which has collectively figured out how to enable phone features that have been disabled by Motorola or by the carriers. If you want to use Bluetooth to do file OBEX transfers or make you phone vibrate first and then ring these features can be enabled by flipping a few bits in the phone’s firmware, a so called “SEEM” edit. The onerous “security” restrictions on un-signed Java applications that block Java access to the GPS and throw up constant nag screens in Opera Mini can be defeated by modifying a configuration file. The knowledge is out there and the community is willing to share it on several Motorola themed web forums.

One of the best of the Motorola hacking sites is HackTheRAZR.com which specializes in the iconic thin RAZR phone. I just discovered HackTheRazr’s mobile site (wap.hacktherazr.com) which unlike so many dumbed down, limited content mobile web sites, features virtually everything found on the full PC HackTheRazr site. The most valuable parts of HackTheRAZR are the Guides, tutorials on how to configure your hacking toolset and get started customizing you phone, and the forums where the latest discoveries are shared and questions are asked and often answered. The mobile site also has images and videos to download and a mobile web directory.

Standard disclaimer: hacking your phone will void the manufacturer’s waranty and can result in a “bricked” phone!

4 thoughts on “Hack the RAZR”