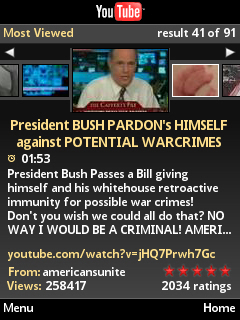 Google has upgraded the YouTube mobile web site (m.youtube.com) to include the entire catalog of millions of YouTube videos. There is also a new YouTube Java application (image) which duplicates the features on the mobile web site but with a slicker user interface. If you have one of the officially supported phones (Nokia 6110, 6120, E65, N73, N95 and Sony Ericsson k800 and w880) there is a link to download the application at the top of the mobile web page. According to a post on SMS Text News, the application also works on other (unspecified) phones. If you want to try it, here are direct links to download a (signed) and if that doesn’t work, (unsigned) version.

I gave both the mobile web and Java variants a whirl on my N95 using a WiFi connection. The Java application has a more attractive front end but once a video starts playing there is really no difference. Both work well but I was disappointed that the videos are in rather low quality 176×144 H263 format. The N95 and most of the other supported phones are capable of 320×240 H264, a much higher quality format. YouTube is already streaming H264 to the iPhone, albeit at a resolution of 480×320. I don’t understand why they don’t send better quality videos to other devices, like the N95, that can support it.

Google has a pretty good Help and FAQ page for the new application covering most of the installation and use issues you might encounter. For example, I initially couldn’t hear any sound in videos played in the application although videos launched in Real Player from the mobile web site were audible. The FAQ told me I needed to enable “Warning Tones” in my current profile.

I ran into another problem that wasn’t covered by the FAQ. Initially all attempts to play videos through the either the mobile site or the application failed with a time out error. I was pretty sure the firewall in my wireless router was blocking some port needed by the RTSP protocol. A little Googling revealed that this is a common problem. There were lots of suggestions of how to fix it by opening this port or that but after opening over a dozen ports I was still getting the error. I finally got it to work by putting the N95’s IP in the firewall’s DMZ but I’m not very uncomfortable with that. If any one knows exactly which ports need to be open for RTSP please share that information in a comment!

I think it’s pretty clear that Google sees mobile as a huge opportunity and is pulling out all the stops to be the mobile internet company. Almost all Google web apps have a mobile counterpart. The only significant one that doesn’t is Orkut and I suspect it’s in the pipeline. The really high volume applications like Mail, Maps and YouTube have dedicated applications. Android and the spectrum auction bid are two more areas were Google is committing very serious resources to mobile. While the Google mobile sites and applications are far from perfect, they seem to be a cut above Yahoo and Microsoft’s equivalents in features and usability. Google is playing to win in mobile.

Msearchgroove has a great interview with Nellymoser founder John Puterbaugh  where he says:

“Microsoft built the OS and then it built Word and those types of programs for the PC. The PC became the electronic office [and] the company that provides the operating system provides with it the key to desktop applications that you [would] need. Likewise, in mobile, Google is bringing the key things that you need for a mobile phone; mapping, mail, SMS, and messaging. They are focused on providing the apps and the OS.”

Google as the Microsoft of Mobile, that’s really what Google wants to be. They aim to own the handset like Microsoft owns the desktop, and I think they will succeed. Our data is moving to the cloud, Google’s cloud, and we will access it from anywhere using the phone in our pocket running a Google operating system and Google applications.