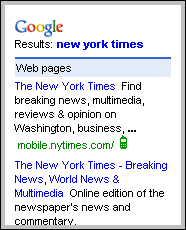 Nadir at SEO Principle tipped me off about Google’s latest redesign of their mobile search page. Appearance wise it’s not a big change but in terms of what it means for the mobile web it’s pretty significant.

The last big change to Google mobile search was in March, 2007 when Google removed the radio buttons that allowed you the specify if you wanted to search the Web, Images, Local Listings or the Mobile Web. Google seemed to responding to Yahoo’s One Search which had just been released. A single search box, no options and blended results from all the different indexes that Google maintains. Not a bad idea but in Google’s case mobile web sites seemed to almost disappear from results. Even a search for WapReview or the New York Times both of which have dedicated mobile versions returned results that were all for transcoded (converted to mobile) versions of a full web site. The mobile web pages were buried on the second or third results pages. It was as if Google was saying their transcoded sites were better than sites designed from the start for mobile use. It just isn’t true, transcoding to mobile is analogous to machine language translation from Russian to English, for example. It can be useful when there is no alternative, but reading something in your native language or the native format of your phone is always preferable. I was pretty upset with the change at the time as it meant a poorer user experience and less traffic for mobile sites. 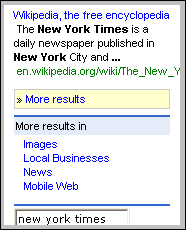 Recently, Google has made three changes to their mobile search page to make it easier to find mobile web sites. 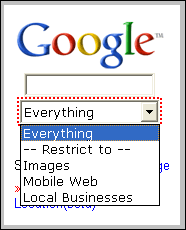 I’m not sure why Google made the change but I like it. I suspect the big uproar in the mobile development community over Vodafone and other carriers implementing transcoding proxies that broke mobile web services and hurt usability raised awareness that transcoders aren’t a panacea. It’s probably also significant that Google recently launched a mobile web advertising platform. If the monetization of the mobile web is to succeeded users have to be able to find mobile sites in search results. Whatever the reason, I’m pretty excited that mobile web results are once again prominent in Google’s search results.