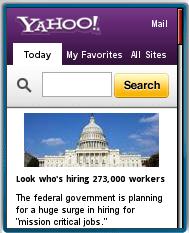 It looks like Yahoo quietly slipped out an update to the “smartphone” version their mobile web portal yesterday. This is the slick, customizable variant of mobile Yahoo that lets your create a personal portal containing your favorite RSS feeds, Yahoo News categories, an unlimited number of stock quotes, local weather and movie times, Y!Mail, Gmail, Hotmail or AOL Mail inboxes and  live status updates from your Flickr, Twitter, Facebook and other social network accounts.

Yesterday’s update is pretty substantial.  It’s mainly a UI refresh, there isn’t much in the way of new functionality. The old design was a single page affair (image, below), the new one (image, above) has three tabs.  The “Today on Yahoo” block of news, sports and entertainment updates that used to appear at the top of the single page has been moved to the first tab, renamed “Today”,  and is greatly expanded with news, business, entertainment and sports sections and a selection of streaming news videos. 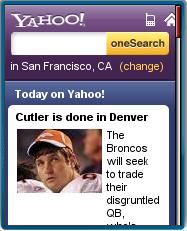 Personalized content is on the second tab called “My Favorites”.  Although it’s not the default tab, it is bookmarkable if you want to go straight to your stuff without loading the “Today” tab first. Edit” and “Add” links at the top of the page let you customize its content with social networks, Yahoo Services, email providers and RSS feeds from your My Yahoo desktop page.

The last tab is “All Sites” and it has links to all of Yahoo’s mobile sites and services including messenger, OMG, Calendar and Address Book.

I’d call the update a definite improvement, the expanded “Today” content is interesting and takes the place of the old Yahoo News Widget that I had in “My Favorites”. Plus you can skip right to your personal content now if you want.  The tabs make navigation more intuitive and finger friendly than the tiny unlabeled icons that were used in the last version. The Twitter, Facebook, etc integration is slowly getting better too.  There still too much wasted space (every item is uselessly labled “Updated Status”) but with this latest release links in Tweets are finally clickable.  @usernames and #hashtags are still unlinked plain text though you can click through to the user’s profile on the Twitter Mobile site where they are clickable. 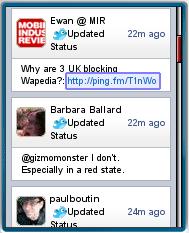 Not everyone likes these sort of personalized start pages.  I do though. I use standalone Twitter and Bloglines mobile sites to keep track of what’s new on the mobile web and I then consolidate everything else in the way of news and personal interests into a single portal.  For my portal choice I alternate between iGoogle and  My Yahoo on the desktop and I’ve jumped around between iGoogle, Netvibes, KeyToss and Yahoo on mobile.  I currently prefer Yahoo’s look and feel and its content mix but its  intermittent buginess and lack of support for all my handsets and browsers keeps me switching back and forth between Yahoo and KeyToss.

I’ve complained about the lack of support for more devices ever since the enhanced Yahoo mobile portal launched in April.  With the latest update Yahoo seems to be supporting fewer devices than ever.  I used to be able to use the new Yahoo with Opera Mini 3.1, older Blackberries and touchscreen feature phones like the Samsung Instinct.  But now these and lesser devices are dumped to Yahoo’s legacy portal which is not personalizable.  Access to the new portal now seems to be limited to iPhone, Android, Opera Mini 4.2, BlackBerry OS 4.6 and  most Windows Mobile and S60 3rd edition phones.  Users of some of unsupported phones are offered a download of Opera Mini 4.2 which does work with the new portal except for some issues with login persistence.

I saw a Tweet from an ex-Yahoo mobile developer that a simplified version of the new Yahoo portal for feature phones does exist  but was never released. I feel if Yahoo wants to retain their leadership as the top mobile destination they need to support all phones with a personalized portal.  It doesn’t have to look fancy but dumbphone users want their Facebook updates, stock quotes and movie show times too. Opera Mini is great but it’s not an option for the 90 million or so feature phone users on BREW networks like Verizon and US Cellular or even T-Mobile USA which cluelessly blocks Opera Mini from working on its branded handsets.