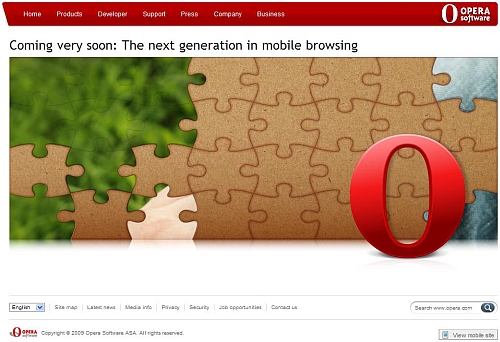 The  words “Coming very soon: The next generation in mobile browsing” and a map jigsaw puzzle image appeared on Opera Software’s “teaser” page at opera.com/next/.

Opera used a similar page during the PR buildup leading to the release of Opera Unite. Five days before Unite’s release, Opera posted a page reading “On June 16th at 9 AM (CET) we will reinvent the Web” If Opera follows the same model this time we should expect something new in mobile browsing five days from today which is next Wednesday, Sept 16th.

So what will it be? Speculation on the My Opera Forums favors Opera Mini 5 or Opera Mobile 9.7 for Symbian.

I have my own theory. At Mobilize yesterday, Opera CEO Jon Von Tetzchner talked briefly about the potential of Opera Unite on Mobiles as a way for users to seamlessly share images and other content. Opera Unite for mobile doesn’t currently exist. That Jon mentioned it suggests it’s in development. Could that be what is coming? I’m guessing it is.

Unite, which is basically a Web Server in the browser would require a bit of processing power and access to low level handset APIs. That suggests native code on a relatively open smartphone platform of which there are really only three;  Windows Mobile, Symbian and Android. I’m hoping for Android or Symbian but realistically I think Windows Mobile is more likely as it has been the platform for all recent Opera Mobile Betas.

One thought on “Coming very soon: The next generation in mobile browsing”