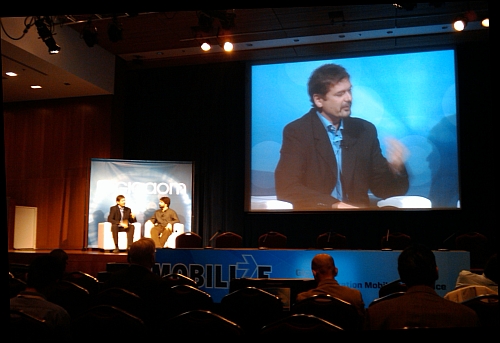 I attended yesterday’s Mobilize conference in San Fransisco and did a quick post about Motorola’s big announcement,  the Cliq with MOTOBLUR.  I wanted to follow up with a little bit more about the conference and my analysis about why I think Android is significant for mobile web browsing and mobile web services.

Mobilize was very well done.  Kudos to Om and his staff and sponsors for sweating the details and making Mobilize a good experience for everyone.  Things like good food, free WiFi and keeping everything on schedule are the keys to making an event like this a success. Mobilize had all of those  plus a live video stream of all the sessions which made Mobilize available to the world.

I had puppy-sitting  duties in the morning and used the video to follow the action until I could make it to the conference for the afternoon sessions.

I actually had a bit of a scare when I couldn’t get the stream to work on my PC in Firefox, Chrome, IE,  Safari or Opera under XP. Even after reinstalling the Adobe plugin and rebooting all I got was a “loading…” animation.  Other Flash videos worked fine,  just not the Mobilize one.  I suspect it’s some weird Windows registry issue with my PC as I know the stream worked for others. 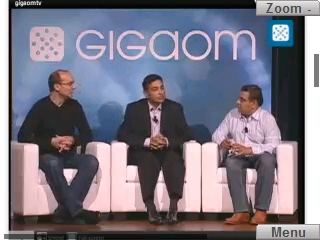 The Skyfire browser on my N95 saved the day as it worked perfectly with the Mobilize live video. I streamed  four hours of  it through Skyfire with only a couple of hicups where it temporarily lost the connection. Doing a page refresh brought it right back.  Skyfire is just incredible if you have to watch Flash video on a mobile.  I do wish that mobile conference organizers would provide more mobile friendly video options like a RTSP in  QVGA or QCIF resolutions, though.

The Motorola Cliq wasn’t the only Android announcement at Mobilize.  Upstart handset maker ING announced plans for a series of Android devices starting next year.  ING made its mark with dirt cheap, but feature rich 3G phones, with tightly integrated Skype, Last.fm, Ebay, Facebook, Twitter Myspace and IM clients.  The social networking features in  MOTOBLUR (and the Palm Pre) owe a lot to INQ who were the first to build Facebook into a phone and to integrate it with the phonebook.  The combination of Android with INQ’s  innovation and focus on the mass market could be huge. The current INQ phone is available on 3 prepaid in the UK for £69.99 ($117) and comes with free Skype to Skype calls and unlimited free IM with Windows Messenger. Plus you get 150MB of free data every time you top up, with top-ups starting at £5 ($8.35) .  I’d love to see that sort of offer in the US where prepaid subscribers are stuck with using dire phones with no or very pricey data options.

I’m excited about Android for a couple of reasons.  First because it breaks the model started by the operators and perpetuated by the legacy device manufacturers and Apple, of locking users and developers out of the advanced features of their phones.  I can install any software on my PC, why should the operator of handset maker restrict what I can do with my phon? In contrast, Android is very open out of the box with no restrictions on installing 3rd party apps. Plus it can be “rooted“, which is analogous to iPhone “jail breaking”  and gives the user free access to everything including tethering and replacing the OS with a custom ROM.  Rooting is also much easier than jail breaking and is permitted and to some degree supported by Google.

An open platform encourages innovation.  An example of this is that Android, even on unmodified phones, gives developers access (with user driven security) to handset location, the phonebook, making calls and sending texts.  This has resulted in a huge number of innovative apps particularly location based ones appearing first or only on Android.

Another reason to be excited about Android is that it ships with a powerful web browser with good support for AJAX, CSS2 and HTML5.  Google is committed to using the browser to deliver rich apps to mobile and I believe they will continue to push the envelope with the Android browser.  Plus Android’s openness means that third party vendors like Opera can create alternate browsers for the platform.  Opera Mini is available on Android and Opera CEO Jon Von Tetzchner has been quoted as saying that Opera  Mobile for Android is in development.  I’m kind of surprised Tetzchner didn’t mention it yesterday when he appeared onstage at Mobilize.  I sure hope that the project isn’t on hold.  The Google browser is good but it has some issues, particularly with caching,  and lacks a fit-to-width mode which I find very useful for efficient mobile browsing. I’d love to see Opera on Android with an advanced native browser using their awesome Small Screen Rendering and the Opera Turbo server assisted mode which makes Opera Mobile the fastest mobile browser of all.