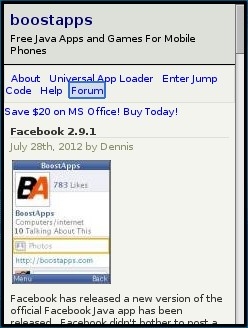 Unlike most mobile platforms, iDEN doesn’t support direct over the air downloads of Java applications using the browser. Games and apps can be purchased from Sprint using a desktop or mobile browser. Purchased games are provisioned to the user’s handset and downloaded to the phone through a Java ME application called Download Apps which is pre-installed on the phone. But there is no easy way to get common third party apps like Opera Mini on these phones. It is possible to install third party Java apps with a cable and a developer tool called iDenJAL however the process is rather error prone and most non-technical users find it daunting.

About a year ago, Sprint added an over the air developer tool, the iDEN Content Uploader which somewhat simplifies the deployment process. But it still requires a PC and the ability to create a .zip file containing a properly formatted .jad and .jar. And like iDenJAL, the Content Uploader was designed for developers rather than end users. It is a bit finicky and gives cryptic or no error messages when it fails.

BoostApps is a desktop and mobile Web front end to the iDenContent Uploader. Zipped apps and games are stored on the BoostApps server and sent to the Content Uploader’s web service. They can then be downloaded and installed on the handset using the Download Apps tool just like content purchased from Sprint. All the user has to do is visit BoostApps.com or BoostApps.mobi, pick an app and enter their phone number . BoostApps works in PC browsers, Opera Mini and the built-in OpenWave browser on iDen phones. All the downloads are legal freeware and include essentials like Opera Mini, Gmail and Google Maps. There are also a couple of games and an alarm clock and calculator apps because Boost phones don’t ship with them.

BoostApps is, as far as I know, the only site that lets users send applications directly to their phones without the need for cables or a PC.

Boost, which is Sprint’s prepaid brand features agrressive pricing with a $50/month unlimited voice, messaging, data and PTT plan and pay as you go service as low as $3.33 per month. Thanks to this sort of pricing Boost is one of the fastest growing mobile providers in the US with a nearly 100% annual subscriber growth rate so far this year.

Boost is also the only nationwide US prepaid provider with unlimited data plans. Although iDEN handsets look pretty basic at first glance they all feature a surprisingly sophisticated Java ME runtime. Unlike the iPhone, Nokia S40s and most other feature phones they can task switch both native and Java apps. Even the base model Boost phone, the $50 Motorola i290, is powerful enough to simultaneously run Opera Mini, Gmail and the built in browser with instant switching between apps.

I plan to add much more content to BoostApps in the coming weeks and months and make it the best source of free games and applications for Boost and Sprint iDen users.