There’s been a minor uproar on the web over Russell Beattie’s post yesterday that he’s giving up on his web to mobile transcoder, Mowser. What got people all in a dander is not that another startup is going down but Russ basically saying that the mobile web is dead and that writing xhtml-mp sites is a waste of time.

Russ had a very rough year. He worked hard to make Mowser into the best of the current transcoders but ultimately that wasn’t enough for him to make even a subsistence living from it. Mowser was a success in terms of traffic but re-purposing other people’s content was difficult to monetize. Now deep in debt, Russ is throwing in the towel and looking for work.

Does this mean that the mobile web is a dead end? I think not. If anything its evolving and growing very rapidly. In nine years we came from 1.5 KB wml pages with 3 lines of text on one and a half inch screens to 10-20 line, 10 KB, xhtml pages with color and images on 2.2 inch screens. And now the next exciting phase of mobile internet evolution and its most explosive growth is just beginning. The iPhone, Nokia WebKit, Opera Mini and other “full web” browsers mark the move to browsing full HTML pages of virtually unlimited size with JavaScript and enhanced CSS effects on phones with screens as large as 3.7 inches. Although Apple likes to say that with the iPhione you don’t use the mobile internet, “just the internet“, the reality is that it’s a 480px wide window into the internet and the lack of Flash support keeps many sites from being usable at all. As good as the iPhone is, the majority of PC websites require too much pinching and swiping to be really pleasant to use on it. There are plenty of challenges for web developers who want to create the best possible experience on PC’s, the iPhone and the other new full web mobile browsers. Already there are hundreds of “made for iPhone” mobile sites. Delivering the optimal experience on the newest generation of mobile browsers will require developers to learn some new skills like mobile Ajax, CSS media queries and SVG.

The traditional mobile web of xhtml-mp sites is hardly dead either. The recent mMetrics study that shows iPhone users as 7 times more like to use the web on their phones than “dumb” phone users is widely quoted but the 7 million iPhones sold to date is insignificant in the face of the 1.4 billion web capable phones worldwide. Even adding the 50 million users of S60 3rd edition phones with the WebKit browser and 40 million Opera Mini users only adds up to 97 million or 7% of 1.4 billion. I couldn’t find any hard numbers on the percentage of total web requests from mobile full web browsers like the iPhone but I’m guessing its around 15% although growing very rapidly (check out this chart showing Opera Mini traffic through Oct 2007). 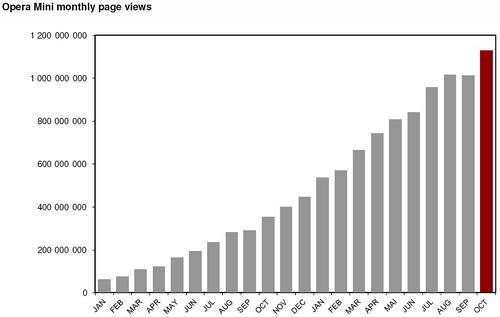 The iPhone inspired fullweb browser revolution is upon us but it will take quite a while for these devices to become the norm. New high end handsets like Verizon’s LG Env2 are still being introduced with crappy browsers and those handsets will be in the pipeline for a couple more years and in service even longer. WML was pronounced dead, what 5 years ago, but I still get a significant number of requests from wml-only phones at yeswap.com.

If you are a mobile developer it’s time to get up to speed on newer mobile web technologies like Ajax and CSS2 Media Queries. Web publishers and developers need to be testing their sites on the iPhone, WebKit and Opera Mini and making sure the experience is as good as it can be. And don’t shut down those legacy mobile web sites just yet or you will be missing out on the traffic generated by over a billion mobile web users who don’t have full web browsers yet.

7 thoughts on “The Future of the Web on Mobile Phones”