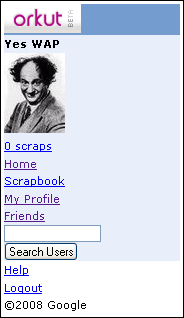 Google’s four year old social networking service, Orkut finally has a mobile version! There’s been no announcement, but m.orkut.com is up and running. InsideOrkut.com (mobile version) discovered it Saturday. Orkut (Wikipedia) never really caught on anywhere else but it’s huge in Brazil and India with 83% of Orkut’s traffic coming from those two countries, according to Alexa. In spite of only being really popular in two (very large) countries Orkut still manages to be the number three social network (after Myspace and Facebook) worldwide.

Orkut follows the open (or MySpace) model of social networking, profiles are public and searchable and membership is open to anyone with an email address. There’s been a pent up demand from users for a way to use Orkut from their phones. Currently the full PC version works very well in Opera Mini and other full-web mobile browsers but there have been issues off and on over the last couple of years with Orkut upgrades breaking the site in Opera Mini.

The new mobile version of Orkut should work on any modern phone with xhtml support. It has a useful subset of Orkut features including Profiles, Friends List, Profile Search, Friend Updates, Birthday reminders, the ability to accept and deny friend requests and Scrapbooking, which is what Orkut calls personal messaging. There are some missing features too. You can’t create or edit a profile, there are no videos or testimonials and Orkut’s extremely popular “Communities” (forums) aren’t there either. Maybe the reason why there was no official announcement is that Orkut Mobile isn’t finished yet!

4 thoughts on “Orkut Mobile is Live”