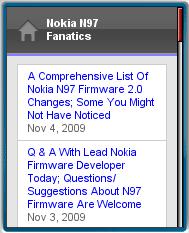 The N97 is Nokia’s flagship model, at least until the N900 comes out. It didn’t get very good reviews initially but with last week’s release of new v 2.0 firmware I’m seeing a lot of positive reports about the handset. The N97 seems to be selling like hotcakes too, moving two million units in the first three months to become Nokia’s best selling Symbian device.

Some of those two million have likely been to N97 Fanatics to read the best break down I’ve seen of what exactly is in firmware 2.0 as well as a comprehensive hands-on 2.0 review.

N97 Fanatics is Mike Macias’ newest site. Mike ran Nokia’s S60 Ambassador program, until it was recently shut down, and has a couple of other model specific sites; E71fanatics.com and theN82blog.com. N97 Fanatics looks to be a great place for N97 users and prospective buyers to hang out and read the extensive coverage of the phone as well as apps, games and themes for it. There are also inks to the best current deals on the phone and an active N97 users forum on the site.

The mobile edition of N97 Fanatics uses Crowd Favorite’s. WordPress Mobile Edition plugin to generate mobile formatted versions of all the site’s pages except the forums. There is at least a link on the mobile site to the desktop version of the forums, which load quickly and are actually quite usable in either the Nokia browser or Opera Mini.