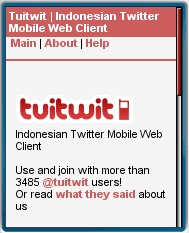 A reader sent me a link to a new Twitter mobile web client called Tuitwit. It was created from scratch by Indonesian developer Judotens Budiarto and is running on Google App Engine. It’s optimized for basic and mid range phones with a default page size of about 25 KB, including images and style sheet. Page size can be reduced to as little as 6 KB by turning off images on the Settings page.

If your Tweet is 120 characters or less and it includes your location, Tuitwit adds a link to a Google Map centered on where you are. You set your location in Tuitwit by inserting “loc(place name, address, city, state, country)” in your Tweet. Most of the location fields are optional, for example loc(San Francisco, USA) works.

Muting lets you hide Tweets from overly chatty friends without un-following them.

Like Tweete, Tuitwit is highly configurable. By turning on all the optional features and increasing the default seven tweets per page to 30 or so it becomes a rich mobile Twitter client for full-web smartphone browsers or Opera Mini.

I’m pretty impressed with what Judotens has done with Tuitwit. The only reservation I have about Tuitwit is scalability. Because it’s based on Google App Engine, theoretically it should be infinitely scalable. But in the course of using it for a couple of hours I’ve gotten several HTTP 500 errors and server unavailable messages. That might just be the notoriously flaky Twitter back end acting up or it could be some start up bugs to work out. The good news is that by retrying I was always able to get Tuitwit to work.