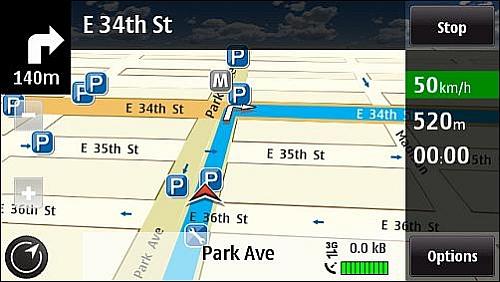 A great deal for owners of the supported phones and future Nokia handsets.  But it’s also a smart stategic move by Nokia that will shake up both the mobile and personal navigation device industries and go a long way to improve Nokia’s market share and bottom line.  Here’s why.

Free navigation should really boost Nokia sales especially in countries where several of  the phones with free navigation are available free on contract and for under $200 on pay as you go. In the US none of these phones is sold by operators. The best deal seems to be the Nokia 5800 XpressMusic from  Amazon for 269.99 with free shipping.

Several of  Nokia’s S40 feature phones like the 6700 classic and the 6260 slide already have on-board GPS receivers and Ovi Maps software.  While they don’t have navigation yet, Nokia’s announcement says all future GPS equipped phones will include free navigation. Which will bring  it to even lower price points.

Competitively, Nokia has upped the ante considerably against Android, whose free navigation is US only and requires a data connection (and data plan).  Ovi Maps can navigate in offline mode with no network connection using maps stored on the phone. Expect Google to counter quickly with their own global navigation offering.

Nokia has really put other phone and mobile OS vendors like Samsung, LG, Palm, Windows Mobile,  etc. in a world of competitive hurt.  Nokia owns its navigation data as a result of the acquisition of Navteq in 2007.  Google created its own navigation database from scratch, but so far it only covers the US.  Everyone else has to license routing data from Nokia/Navteq, TeleAtlas (owned by TomTom) or Google and its not cheap. Expect hardware makers like LG, Motorola, HTC and Samsung to increase their adoption of  Android and its free navigation to counter Nokia.

Except for TomTom, stand alone navigation vendors like Garmin, Magellan and Navigon, already reeling  from Google’s free navigation offer, are in real trouble.  Sure, they can still sell some high end units with big screens and enhanced GPS recievers to hard core road warriors and auto manufacturers.  But the bottom just dropped out of their business with the loss of the high volume low end market to Nokia.  Look for some of these firms to fail.  TomTom won’t sell as many navigation units, but they should be able to cut their loses from new licensing deals with phone makers for their Tele Atlas navigation data.  TomTom is also an attractive acquisition target for the likes of Samsung or LG.

Well done Nokia, for increasing their competiveness, giving consumers something to cheer about, and at last justifying their $8.1 billion Navteq aquisition.

2 thoughts on “Nokia’s Free Navigation Puts the Competition in a World of Hurt.”