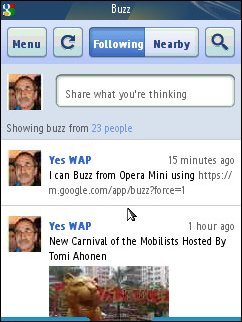 Google’s Buzz has certainly generated a lot of negative reactions around the web over privacy issues and the fact that many Android users were denied access to it. Google has been in damage control mode ever since the Buzz launch and has made some changes that go a long way to answering both criticisms.

The privacy issue was obviously the more serious.  A lot of  Gmail users felt that their privacy had been violated by Buzz’s auto-follow feature that defaulted to making their email contacts public. There were also complaints that  Google had made it too hard to disable Buzz and to control sharing .

Google responded with several  changes, including the ability to turn off  auto-follow or disable Buzz altogether and made privacy settings easier to find and use. All Buzz users should read  The EFF’s tips for using Buzz while protecting yourself online. Google’s explanation of the changes it has made to the Buzz security model  here and here are also recommended reading.

The problem for Android users was that the Buzz webapp requires Android 2.0, which is currently only offered for the Droid/Milestone and Nexus One.  Even Google Maps 4.0, which provides a subset of Buzz features, requires Android OS 1.6.  Several Android models, including the HTC Hero and Motorola CLIQ, are still stuck on Android 1.5 leaving their users with no access to Buzz at all.  In response Google has opened up the Buzz webapp to all Android users.  If you go to buzz.google,com with an Android 1.5 or 1.6 phone you now see the message:

buzz.google.com requires
Android OS version 2.0+
iPhone OS version 3.0+
Older OS versions may be able to access some features, but are not officially supported.

Continue on an unsupported device.

The “Continue on an unsupported device” link points to: https://m.google.com/app/buzz?force=1 which Jonathan Mallin at Tech Bottle discovered also works pretty well with the Bolt Browser.  Inspired by Jonathan’s success I’ve been experimenting with various mobile browsers and found that Buzz is usable with MicroB and Firefox Mobile on the N900 and with Opera’s Mini and Mobile browsers as well.

I actually tried Buzz with nine different mobile browsers with the following results:

HTC Dream running Cyanogen’s Android 1.6 based custom ROM version 4.2.14.1 – everything works although scrolling around the Buzz map  is very slugish

Nokia N900 using either MicroB or Firefox Mobile 1.0 – Some aesthetic issues. Buttons are missing their styling and look like plain text  and text boxes are missing their borders,  but everything works except that the maps can’t be scrolled at all.

Bolt 1.7 Pixel perfect rendering (image above)! The Buzz “Following” page is fully functional but the  “Nearby” page doesn’t load, complaining that “Location is not available”

Opera Mini 4.2 and 5.0, Opera Mobile 10 Beta 3: Same styling issues as the N900 browsers. Otherwise similar to Bolt with the “Following” page, including posting Buzzes working well but the “Nearby” page unusable without location support.

Tip: If you get an empty page in Buzz , try logging into Gmail before vising Buzz.

Kudos to Google for opening up the Buzz web app to unsupported browsers.  While not everything works perfectly, Buzz is completely functional on the N900 and except for the location features quite usable with Bolt and the Opera browsers.  Supporting those three platforms opens up Buzz mobile access to at least 60 million more users.  If you are using another unsupported browser like the Palm WebOS browser,  Netfront,  Obigo or the Symbian V5 browser give https://m.google.com/app/buzz?force=1 a try.

5 thoughts on “Use Google Buzz In Opera Mini, Bolt, MicroB and Firefox Mobile!”